Year 2014 wasn’t the best year in my life, most of all because some of the negative events can’t be considered even educational. But still it wasn’t all bad and I’m grateful for the good things and look forward to more of those this year.

We’ve got some rain in the last two months of 2014. That hasn’t solved our drought problem but made it a bit less severe and gave us hope.

We got a chance to spend time with one of the friends from our youth whom we haven’t seen for many years. He hasn’t changed much and we already plan our future visits.

I had a relatively close encounter with charming Hugh Laurie.

I enjoyed many mini-trips to the surrounding wine regions; one of them with thoughtful and endlessly generous with her support Suzanne (Eiderdown Press) and her husband.

I received an extremely touching gift from Daisy (coolcookstyle) and hajusuuri (a spontaneous perfume lover who became a contributor on my blog).

I took an obscene number of perfumes to the Hawaii vacation (I hope they enjoyed it as much as I did).

I had good time perfume shopping with Natalie (Another Perfume Blog).

And, finally, despite all the work-related stress and busy schedule I had a wonderful holiday season, which culminated in the one of the most delightful New Year celebrations at our friends’ house in Austin.

Now let’s see how my 2014 looks in perfume terms (numbers in parentheses are from 2013, for comparison where applicable).

In 2014 I tested1 even less perfumes than in years before. It isn’t a complaint, I think I’m testing enough: I pay attention not just to new releases or even perfumes new to me but also I’m revisiting some of the previously tested perfumes. I tested 299 (321) perfumes from 108 (107) brands on 391 (461) occasions. This year there were also fewer perfumes that I’ve tried for the first time – 147 (185) and only 55 (fifty-five!) of them were created in 2014. It’s less than, according to Parfumo, has been released by now from the beginning of this year. Probably I could add 15-20 mainstream perfumes that I smelled at a store on a paper strip and never went for a sample or skin test. But still it’ll barely scratch the surface of the last year’s new releases. 2,646! Can you believe it?! It’s a huge number of new releases and I tested 2% of them. Out of those 55, I liked – more or less – just 11 (20% of tested) but I would consider wearing only 6 (~10%) of them and, most likely, not from a full bottle purchase.

I have a feeling I’ll test even less in 2015: with endless new releases who can follow them?

Since I usually end up not liking most of the perfumes I test and, at the same time, the number of perfumes I like and own is enough to wear a new one every day for several months, same as the year before, I mostly wore2 perfumes from my collection (bottles and decants) while using samples just for testing or the final decision stage before [not] buying the perfume I thought I liked. In 2014 I had a better rotation of perfumes than the year before – I wore 156 (142) perfumes from 61 (54) brands – but I used perfumes less often – just on 341 (355) occasions. 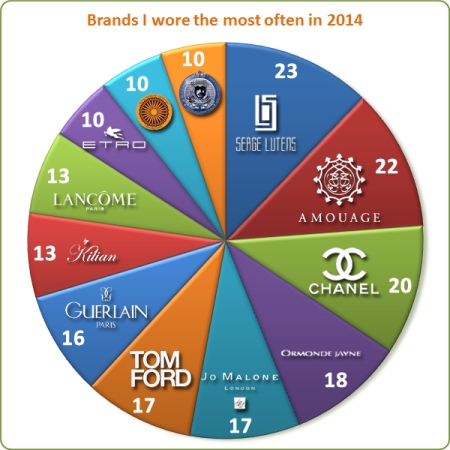 Eight out of twelve brands I wore the most this year are the same as for two previous years, which isn’t a big surprise: those are my favorite brands and I have those perfumes in my collection. More interesting are those brands that moved up. Two out of four got that high with a single perfume from each of the brands: Rajasthan by Etro (I told its story in the How many perfumistas does it take to … post) and Chic Shaik No 30 by Shaik (its story is still waiting to be written). The third brand, Lancome, made it also mostly thanks to one perfume – my first and everlasting perfume love Climat (I bought a back-up bottle and started wearing it more often) but there was one more perfume – Mille et Une Roses – that contributed to the statistics. The last new player on my yearly Wheel of Fortune chart is By Kilian. I finally found several perfumes in this line that I like to wear: Amber Oud, Prelude to Love and Love & Tears (and there are several more promising candidates).

It’s getting harder to come up with new silly aspects of our hobby to present in numerical form for this monthly series. I realize that many of my current readers haven’t read all the previous posts and those who have, most likely, won’t remember each of them, but I still couldn’t bring myself to repeat exactly the same topic. Because of that there were fewer posts based just on my personal perfume-related habits (Perfumes Tested in 2014 by Year Released, How many perfumistas I met in RL, TwitterCounter’s Predictions vs. Reality) and more of those, input for which I asked from you (Ten Niche Brands You Need To Know, What is the main reason for your spontaneous perfume purchase?, 10 Most Popular Brands (based on Olfactoria’s Travels Monday Question), To Wear or Not to Wear a perfume you used to love but don’t any longer if there is no other choice?, Perfume Shopping Mecca, Favorite Amber Perfumes).

Come back in a month to see if I could think of anything new to count. Hopefully, not sheep.

1 For the testing I apply a perfume to one area on my arms easily available for the repetitive sniffing. But, most likely, I’m the only one who can smell it. I can test two, sometimes even more perfumes at the same time.

2 When I wear a perfume I apply it to at least three-four points and usually I plan to spend at least 4-8 hours with the same scent so I’m prepared to re-apply if the original application wears off.