… persuade me to go for a perfume? At least four.

I remember reading somewhere the announcement of the upcoming release of Rajasthan by Etro and either the author or somebody in comments was extremely excited about the bottle and was almost prepared to go for a blind buy. I shrugged: not only I didn’t know the brand (I’m not into fashion much) but I couldn’t see the bottle attraction either. One.

Then I read a rather negative review from Kevin (Now Smell This) and promptly forgot about Rajasthan: since I didn’t expect anything from it in the first place I wasn’t even disappointed. Two.

Last year Natalie (Another Perfume Blog) and I went to Barneys where I saw Rajasthan bottle for the first time. Something in the bottle spoke to me, I thought it was beautiful. I tried the perfume on skin and liked it. Natalie politely agreed that it was nice. I asked for a sample and got about a ml – everything that was left in the tester. I even tried to get them to sell me an empty bottle. I knew it wouldn’t happen: from what I’d heard, all perfume departments have strict policies about empty bottles. But it was a fun conversation with an offer to meet with the SA at dumpsters after hours. Three.

The sample lasted me for a couple of tests that confirmed that I liked Rujasthan. But it wasn’t enough to make a decision – so I waited.

Several months ago during Suzanne’s (Eiderdown Press) visit I tried Rujasthan at Barneys again. I still liked it. Suzanne politely agreed that it was nice. By that time I already loved the bottle but not enough to pay full price for the perfume. Four.

Three weeks later a perfect test bottle of Rajasthan was mine for half the price (eBay is very useful sometimes). Usually I do not buy testers: if I get a bottle, I want it to come with a box to store it in. But in this case it didn’t matter since the bottle isn’t transparent.

Etro has created a very pleasant day-wear perfume that represents neither scents of India nor even westerners’ stereotypes for them. Notes (via Fragrantica) include: lemon, pink pepper, portulaca, mimosa, rose, black currant leaves, black locust, amber, labdanum and white musk.

I’m not too good with dissecting perfumes so there are many notes, not detecting which wouldn’t surprise me much. But lemon is such a ubiquitous scent – how can it be that I don’t recognize it when I smell this perfume? Etro’s site in a poetic description of Rajasthan qualifies this note further – “winter lemon.” As I tried to find any explanation of what was that mysterious variety of lemon and how it was different from a regular lemon (I failed), I came across earlier announcements of the upcoming Rajasthan release and they all, as well as some reviews from that time, mentioned “winter lemon flower” note. I assume it was either a part of the official press release or something found in translation. It would explain the absence of the recognizable citrus smell – but then why did Etro remove it? And if lemon is not there, how could others detect it in the composition? My nose must be off.

What I can smell is a sweet (but not too much – for my nose) and powdery light amber scent with enough spices to keep it from being perfectly polite. I cannot smell rose – or any other flower – though I can imagine that the sweetness I smell is coming from mimosa (or its rendition). Rajasthan loses projection within three hours mark but stays as a skin scent for over 10 hours (white musk, I assume). I do not love it but I enjoy wearing it from time to time. And did I mention how much I like the bottle? But only after it joined my collection I realized that I’ve liked that color scheme long before I saw Rajasthan bottle: look at the picture of one of my favorite necklaces I wore for the last five years. 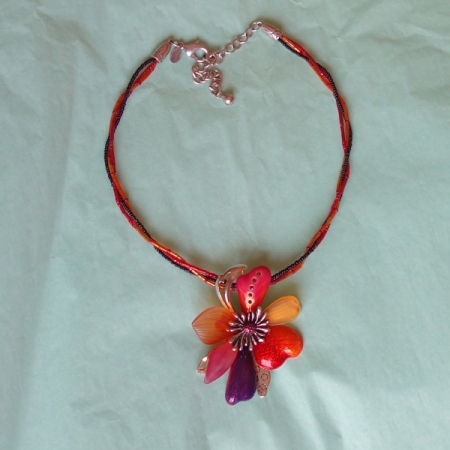 27 thoughts on “How many perfumistas does it take to …”