Two young girls (about 11 years old) from different parts of the country met during a summer seaside vacation and became friends. One of the girls, let’s call her Emma, wore a pendant made from amber that had a tiny fly inclusion in it. She told her friend (let’s call her Ann), who admired the pendant, about the gem – from where it comes and how it is discovered. And each morning of the trip the two of them would be searching the beach hoping to find amber – without much luck. As Emma was leaving a day earlier, she suggested to Ann, who had lost hope to find anything, to do the last search alone. Even though her parents were hurrying her to leave, Ann went back to the beach and, against all odds, found a beautiful piece of amber. She was so excited that she just clutched it in her hand and ran back to her parents. The first time she actually looked at it was on her trip back home. First she was amazed by how beautiful it was – even more beautiful than the one in Emma’s pendant. Then she was surprised that her amber also had an inclusion in it. And then she discovered a tiny hole in the gem and realized that it was from a pendant’s bail… 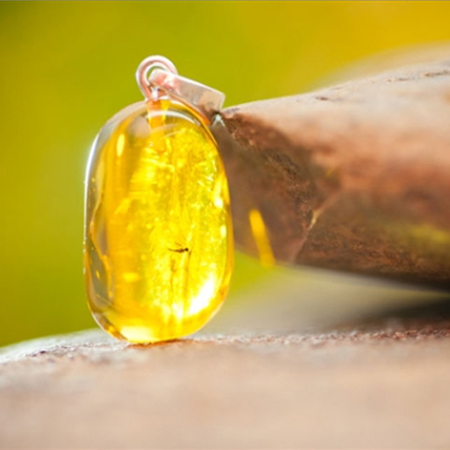 This is an abstract of the story I read many-many years ago. Since I remembered neither the author nor the name of the story, I tried all the searches I could think of and didn’t find it online. So I did my best reconstructing it from memory. I wanted to share it with you because it was the first association I got when I heard the perfume name Captured in Amber. Not just the story itself but that warm feeling from the generous and completely altruistic gesture of friendship: Emma, whom Ann would probably never see again since they were too little and lived too far away from each other, not only gifted her friend with her own amber but made it in a manner that ensured that Ann couldn’t refuse it.

I find it fascinating that Shelley Waddington, the founder of En Voyage Perfumes and the creator of Captured in Amber, included in the composition both ambers known in perfumery: the accord created from labdanum, benzoin, vanilla, etc. and ambergris, which used to be known as amber before this name was adopted to mean “Baltic amber (fossil resin).” You could say that this perfume is a study in amber.

Despite what it says in the list of notes or what I read in others’ reviews, I do not smell chocolate in Captured in Amber. For me it’s rather a honey-like smell. But it is good honey, not the one that gets urinous# as it develops. When I applied Captured in Amber for the first time I was astonished by how precisely it fitted into how I imagined perfume with that name should smell. It is sweet and viscous and rich and warm and I cannot stop smelling my wrist – even when I’m wearing it with the regular application, not just testing. I keep doing that because the scent is such that I just want to soak it up in the less diffused form, directly from my skin. I feel caught, captivated, captured in that amber and I won’t even try to escape…

It would be perfect to conclude this post with a picture of Rusty sniffing a bottle of Captured in Amber but I still can’t decide which concentration I should buy – eau de parfum or parfum extrait. As soon as I make up my mind I promise to make it up to you.

Images: pendant – from Via Valeron online store; ring – my own.

# MS Word spell check insistently tried to replace “urinous” with “ruinous”; not just suggesting but actively substituting. It’s not completely wrong: urinous honey note in perfume is ruinous to my enjoyment of the said perfume indeed but still I prefer a software application not to put words into my mouth, so to speak.

37 thoughts on “Captured in Amber of My Memory”