I grew up in a country where the term French Perfume was almost a brand on its own. “She wears French Perfume” or “He gave her French Perfume for her birthday” – without even a notion to specify a house or a brand. But then there weren’t that many perfume brands … I won’t even say available – present or widely known there at the time. French Perfume was in some respect a status symbol. 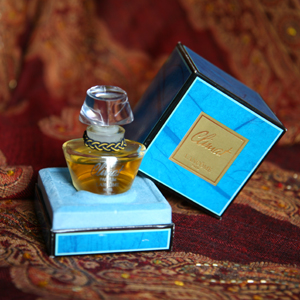 Climat by Lancôme was one of a few procurable brands. In my childhood older women used to wear this perfume: not because it was considered older-age appropriate, but rather because the price and scarcity were more “younger-age prohibitive.” My grandmother went through several bottles and I kept getting empty ones from her to play with. When I was seven it became my first and everlasting fragrant love.

For many years Climat was my only luxurious, dressed-up, going-out, Big Evening Perfume. It was my signature scent – I just wasn’t familiar with the concept.

I’ve gotten older, changed continents, mastered an online shopping and accumulated a slightly frightening (until recently mostly mainstream) fragrance collection. A couple of times I attempted buying my beloved fragrance online but every time something wasn’t exactly right: it was a reformulation, a different concentration, a fake or an old perfume that went bad. I gave up and succumbed to the idea of Climat being lost to me forever.

I was really happy when Lancôme re-issued the scent as a part of their anniversary collection. But back then I was still naïve and thought that almost any perfume can be bought online cheaper, maybe not immediately after the release but soon after. I’d waited for so long, what was another half year?! First I waited too long and missed a spray bottle. Then I decided to get a bottle with a cabochon but hoped to find it cheaper. And then they all were gone again. That was a cue card for me: I found and bought samples, then a full bottle and then a back-up full bottle of it. Now I’m thinking if my back-up bottle gets too lonely in my cabinet…

Even though I smelled Climat first on my grandmother and she was the one who allowed me to use her perfume from time to time and then presented me with my very first personal 14 ml bottle of Climat Parfum, I’ve never associated it with her… until recently when I gave it to her on her 90-year birthday. She says it smells different from how she remembers it but she still likes it.