As I started writing this post, it dawned on me how prescient were the lines that inspired Pissara Umavijani to create Le Pavillon d’Or: “… to live more happily in just any confinement” (Montri Umavijani, a Thai poet and the perfumer’s father). In just several months after the perfume release, the whole World suddenly had to slow down and start learning how to live in confinement and if not be happier but at least survive.

Le Pavillon d’Or is very fitting to the circumstances: it is not manifestly shiny, so you don’t have to rationalize to yourself wearing it while working from the kitchen table or blitzkrieging through a grocery store in search of TP, but it possesses an internal beauty that elevates your spirit and contributes to the feeling of well-being and… well, happiness. 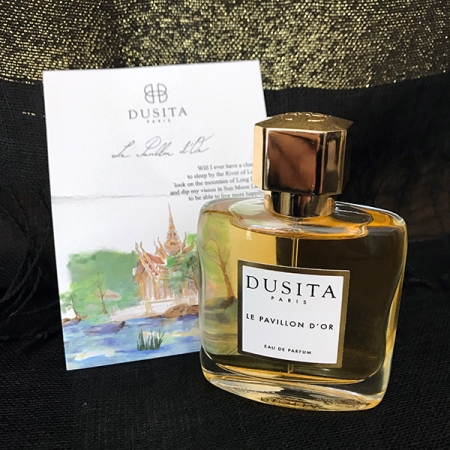 Do you remember how Parfums Dusita brand appeared on the scene? It came seemingly from nowhere around 2015, released 3 perfumes by a new perfumer, and those perfumes were offered at a price point that not that many niche brands dared to put on their price tag back then. Especially not those without some history/standing in the community or at least done by renowned “noses.”

While I do not think that perfumes (or any luxury goods for that matter) should be accessible or even reasonable in their price setting, I remember being slightly annoyed by that launch. (Little did I know that from that point on there will be dozens of brands springing up like mushrooms and flooding the market with perfumes at astounding prices.)

But since back then many blogs that were reviewing and discussing new perfume launches were still around, I got curious about the brand because of the general buzz those reviews created. So, as soon as I got a chance, I tried those first three perfumes and … let me put it this way: I still didn’t get either the prices or the buzz. I guess, the fact that two out of the first three perfumes were built around ingredients I usually dislike (agarwood and tuberose) didn’t help.

The next three perfumes that were released I found interesting, but I didn’t want to wear any of them – so, I decided that Parfums Dusita wasn’t “my brand” and could have never tried another perfume from this brand if it weren’t for my perfumista friends. Cynthia (The Fragrant Journey), after in comment to her wonderful review, I expressed interest in testing Le Pavillon d’Or, had shared with me the remaining portion of her tiny sample. And it was enough for me to fall in love with Le Pavillon d’Or. 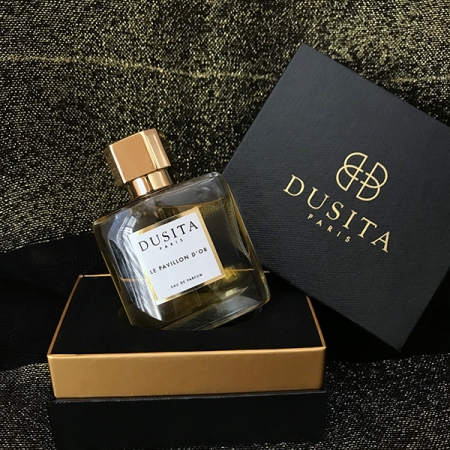 I’m a little confused with the notes for Le Pavillon d’Or. The brand’s site has the following list (explanations in parentheses are mine): Wild Menthe Citrata (bergamot mint), Honeysuckle Extrait, Boronia Absolute, Frankincense Green Sacra, White Thyme Oil, Vanilla, English Oakwood and Sandalwood Spicata (Australian sandalwood). I do not smell mint, but Cynthia in the review linked to above shares what she discovered about the ingredient used. Fragrantica, Luckyscent and the perfumer’s older posts on Instagram also mention fig leaves, heliotrope and orris butter. I wouldn’t recognize heliotrope (in general, not specifically here), but I thought that I know both fig and iris enough to distinguish them in the composition, and I can’t. So, I’m not sure if they are there, were there before but not anymore, or if they are created by some other ingredients that I don’t recognize as such. Le Pavillion d’Or starts as a very green perfume – a tad herbal, slightly bitter and somewhat uplifting. It develops through sheer resinous frankincense into a woody base, though my nose isn’t sophisticated enough to recognize which wood. But when you like what you smell, it doesn’t really matter what you smell, does it? 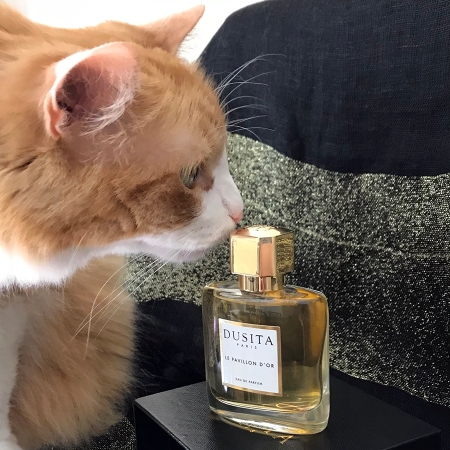 The pavilion is golden not because it’s made of gold. Imagine a late-Spring morning when a rising sun reflects in dewdrops on the wooden beams of a pavilion making them sparkle through the leafy branches of the old tranquil park.

20 thoughts on ““All that is gold does not glitter…”: Parfums Dusita Le Pavillon d’Or”