How many times can the same perfume be featured on the same blog? Let’s see…

Five years ago I started this blog with the story of my first and life-long perfume love Climat by Lancôme. A year later Vanessa (Bonkers about Perfume), Suzanne (Eiderdown Press) and Natalie (Another Perfume Blog) participated in one of the Déjà vu series’ post doing a blind comparison of Amouage Gold and Lancôme Climat. Two years ago Climat made an appearance in a short romantic account of my birthday trip. And finally, last year I invited my whole Climat family to my blog’s fourth anniversary. So, not counting numerous mentions whenever a topic of favorite perfumes is brought up, I told you four stories about this perfume. Believe it or not, I have the fifth one.

Several months ago, after probably a year of silence, out of the blue, I got a note from Jordan (Fragrant Man) alerting me to the news about my favorite perfume: to celebrate the 40th anniversary of the brand’s presence in Russian market, Lancôme has launched a limited edition of Climat – L’Edition Mythique.

I immediately went online and read everything I could find about that release: there were only 3,000 bottles made and it was available in one boutique in Moscow. There weren’t any “professional” reviews out yet but I found several first impressions. As always, some liked it and thought it was very close to how Climat used to smell in 80s, others were disappointed.

I wanted it. Good or not, I wanted to experience it myself and be the judge. And that’s when I started panicking: Climat used to be one of the most popular perfumes in Russia; if I wanted it, how many other people – with the same nostalgia – would want it too? Yes, it was on the pricey side, but three thousand bottles didn’t seem that much for one of the richest cities in the world with 12 million population (not counting tourists).

You know how friendly and helpful perfumistas are. What I’ve discovered was that people in the cooking community are also extremely responsive and outgoing. Once I realized I didn’t know anybody from Moscow, I asked my friend Katya (Lyukum Cooking Lab) if maybe somebody from her circles could help.

Within two days a multi-step extraction mission had been devised. Katya’s friend who lived in Moscow made a trip to the boutique and got a bottle of Climat – L’Edition Mythique. Then she handed it to another friend who was leaving for China on a culinary school tour, which my friend Katya was joining as well. From China Katya brought the bottle to Texas where she lives and my friend A., whom some of you know as a “perfume mule”, went there for a business trip and delivered the perfume to me. Moscow -> China -> Texas -> Bay Area, CA. It is one of the most well-traveled bottles I’ve known! 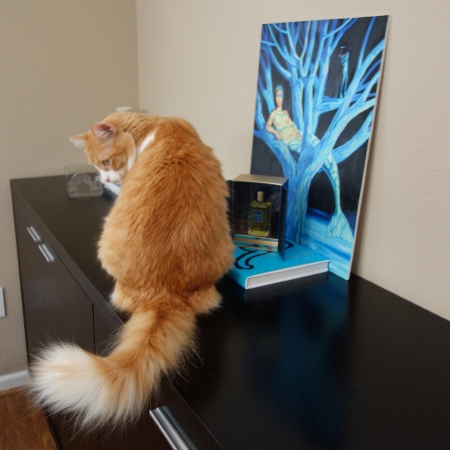 Since then I wore this perfume a couple of times as well as tested it in parallel with all other bottles and samples I have. I don’t think it’s better than the previous re-issue (2005 La Collection) or closer to the 80s’ version that I knew and loved. But I’m glad that thanks to all the friends, virtual and real-life ones, I was able to get this bottle: I own the latest three genuine Lancôme’s takes on this perfume – Climat La Collection (EdP), Climat (EdT) and Climat – L’Edition Mythique (perfume extract) and I love them all.

So, on this fifth anniversary of my blog I officially announce that I stop chasing my tail in the quest for this perfume because I do not remember any longer how “my” Climat smelled 30 years ago and I do not miss it.

Speaking of tails… How many tails do you think are there on the photo above?

P.S. If you’re not familiar with this perfume, I recommend reading the blind comparison post from the link above.

P.P.S. If you have any interest in cooking, I strongly urge you to browse my friend’s Katya’s site (though I do not recommend doing it while being hungry).