As someone whose watch lists on different streaming services mostly consist of police procedural shows, I have to concede that this post, being the third after Rusty the Cat: On Food and Treats and Rusty the Cat: On Comfort Temperatures, moved the topic over the threshold when it definitely qualifies as serial… I mean, series.

Do you know that cats love cardboard boxes?

Even though my grandparents had cats with whom I spent my summer breaks in the same house, and despite of the fact that my vSO and I had a cat once (I told this story many years ago – Orange Cats in My Life – Part I: Found and Lost), somehow I had never been privy to that cats’ trait.

I’m not sure why that was: either those particular cats that I observed were not adventurous; or maybe breeds of cats in my native country had different inclinations; or can it be that back then we didn’t have that many boxes in general, and those that we were rarely getting weren’t left out for pets to play?

Whatever it was, the first time I realized that it was “a thing” with cats was when many years ago a friend told me about the famous Japanese cat Maru and shared a couple of YouTube videos of him packing into different boxes, including the tiniest ones (it was years before he was certified by Guinness World Records as the most viewed single animal on YouTube).

And then we got Rusty, who over the years demonstrated to us how much cats love boxes.

Whenever a new box only gets in our house (which these days happens even more frequent than before), Rusty immediately plops himself on top of them. He notably likes wine boxes – probably because they are very steady and safe to jump on and off. 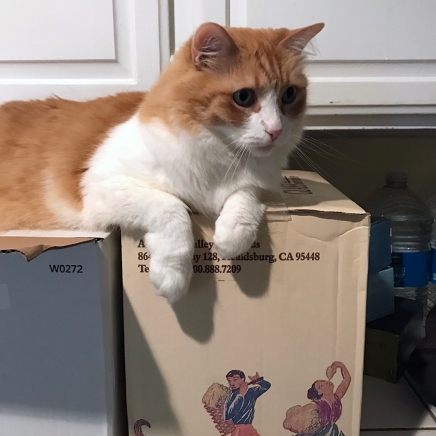 All other boxes are also fair game, especially once they are emptied. Rusty would pack himself into almost any box – be it large, small, tall or shallow. 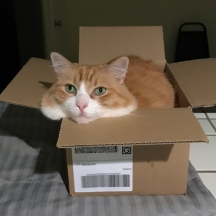 Usually he stays in a new box for a while, probably until he impregnates it with his scent. After that he loses interest. But there are two boxes that we keep (replacing them from time to time on the same spot), and he uses them for years: one is a box to where he runs and hides when I yell at him for doing something he isn’t supposed to do (like trying to steal meat from a hot frying pan); and the second one is a “Greeting box,” as we call it: it stands facing an entrance door from the garage, and Rusty sits in it when we’re returning home from somewhere (on a picture below it’s a shallower box to the right from the temporary Rusty’s toy).

40 thoughts on “Rusty the Cat: On Boxes”