Four months ago, when I posted Rusty the Cat: On Food and Treats, I didn’t know whether it would become a series, mostly because I wasn’t sure I would be able to get good cat pictures due to the combination of my work hours and lighting conditions. Little did I know that two weeks later our entire organization of work would change completely because of the shelter-in-place and everything that came with it. So, now I constantly get opportunities to capture my cat doing… whatever cats do to amuse themselves, annoy their humans or just pass time.

I knew for a while that a normal body temperature for cats was higher than for people. So, it was logical for me that in colder season Rusty favored my or my vSO’s lap to just laying on a chair or one of his mats. What was rather unexpected, even in summer, in the middle of a very warm day, while I would be working in my second-floor office – one of the warmest places in our house, instead of staying on the cool first floor, Rusty would come up and plop himself on my lap, clearly enjoying it (and I would be dripping with sweat).

Sometimes, Rusty would place himself on a blanket next to my work laptop in such a way that one of his paws would touch or be really close to the laptop’s vent. The air that comes out of it is so hot that it is hard for me to keep my hand next to it. But Rusty doesn’t seem to mind (the highlighted text on the picture below is what actually was shown on the monitor: I was going through the security training course and had to stop to take a picture because I thought that it was a hilarious illustration). 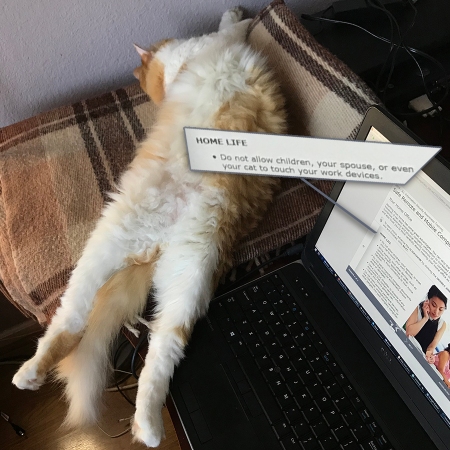 But recently Rusty overdid himself: during one of the hottest days of the week (it was ~27C/81F in the house) he discovered wonders of my vSO’s laptop: being connected through the docking station to the external monitor and keyboard, it works with the closed lid, which is warm to touch. So, Rusty figured out that it was a perfect spot, from where he could hypnotize one of us while waiting to be fed after the end of the work-from-home day. Now he’s doing it almost daily. 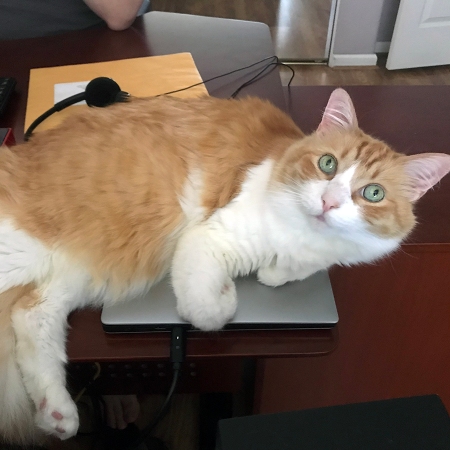 We discussed with my vSO that, as Rusty gets older, at some point we’ll probably have to get him a bed with a built-in heating pad. But we’re worried a little that he’ll dump us and spend all time in bed.

17 thoughts on “Rusty the Cat: On Comfort Temperatures”