I’m not sure if this post will become the first in the series. It may, since I like series, Rusty is a tireless provider of amusement in my life, and, in general, Internet runs on cats. But I won’t promise any regularity since these posts require pictures, which, in their turn, require good lighting, which is not easy to catch with my crazy work hours that do not promise to be much better this year, despite all my attempts. But we’ll see.

I’ve heard of the cats who can leave half-full bowl and come back to it later or refuse to eat something. Rusty isn’t one of those cats: any food stays in his bowl for two minutes or less. He inhales* whatever we put there and wants more. All his life he gets cat food, but I’m not sure he understands the difference. For him all food is food, but for some strange reason we refuse to share with him as much of our food as he’d like us to. So, he resorts to begging or … I can’t even say “stealing” since he doesn’t try to do it covertly – prying it from us. 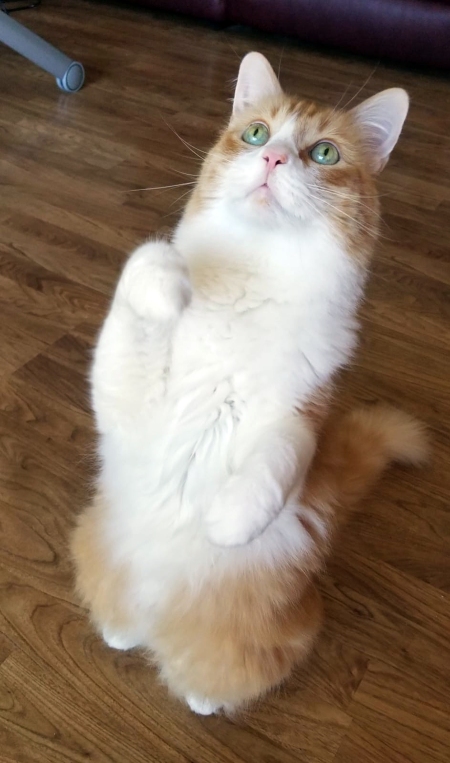 Since we feed him canned food, mostly pâtés, I was worrying that he didn’t get to chew anything, and his teeth weren’t being cleaned. The only things that he normally chews on are tiny treats I give him as a bribe or a reward for taking pictures for my blog or as incentive to do a trick (he does those for treats). But those tiny things take him a second or two. I hear: “crunch-crunch” – and he’s done. 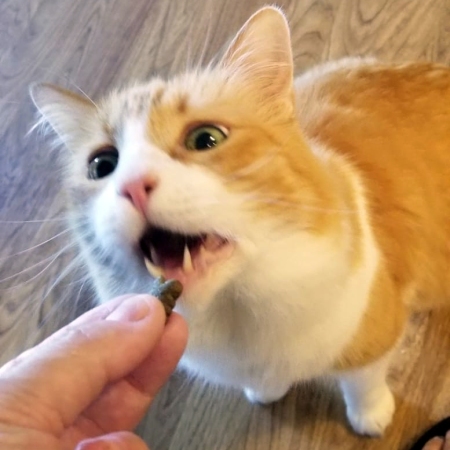 Friends recommended special dental treats that were supposed to be good for cats. I must say that those are quite expensive treats (approx. 50 c per treat). But what won’t we do for our feline friends, right? These treats are much larger than usual “one bite” cat treats: they are about a size of a wine bottle cork (see the picture below). But they are relatively soft and easy “bitable,” so one would expect a cat to spend some time biting smaller pieces off of it allowing enzymes in it to work on plaques to improve cat’s oral hygiene.

Rrright… When I gave it to Rusty for the first time, he was extremely excited: he got it from me, spent a couple of seconds re-arranging it in his mouth, after which, with a visible effort, he… just swallowed it whole. I was watching him in terror thinking what to do if he starts choking. Even though he was fine, I didn’t have the courage to repeat the experiment. But since I still wanted to get some health benefits for Rusty from the treats I bought, I started feeding them to him while holding them in my fist and allowing Rusty to take a smaller bites of it, preferably with his molars.

You should have seen the expression on my cat’s face when I started doing that! He couldn’t understand what I wanted from him, and why he couldn’t just gulp the thing, but “food is food,” so in a while he learned what I wanted him to do – even though he still clearly thought his human had some issues. The disadvantage of this method, though, was that in his enthusiasm Rusty could not always distinguish the treat from my fingers…

You can understand my excitement when last Christmas Lucas (Chemist in the Bottle), in addition to wonderful gifts for me (and not only of the perfumed kind), sent some treats for Rusty (picture above). Being much longer and denser, those looked like something that Rusty would definitely have to chew on. (sigh) Nope. I’ll give him that: he didn’t swallow it in one piece. But he quickly bit it in half – and then swallowed. I was petrified: the way he was swallowing it, I was sure it wouldn’t go through, and I’d have to rescue my cat from suffocating. To my relief and amazement, he was fine. But that was the last time I experimented with making him to bite something off: I cut or tear smaller pieces before giving it to him. He doesn’t mind. 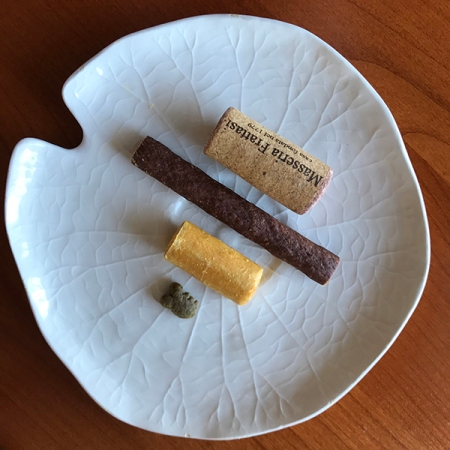 * As I was writing this post, I got curious about different synonyms for “eating quickly” and in my search came across a discussion in the WordReference forum in 2007 where a number of people, especially from the U.K., claimed they’d never heard the verb “to inhale” to be used in that meaning, even jokingly. I was surprised because for me it was something given. I asked my vSO, and he reminded me from where it came into our lexicon:

Ross: I’m just saying, if you can’t eat by yourself, how do you expect to have a baby by yourself?
Rachel: I can too eat by myself!
Ross: When have you ever?
Rachel: When certain people leave the table and I am not finished!
Ross: Well, certain other people take 2 hours to eat a bowl of soup!
Rachel: Oh, please, you inhale your food!
Ross: I grew up with Monica. If you didn’t eat fast, you didn’t eat!

Out of many synonyms suggested on that forum, I really liked the idiom “to wolf down” and thought that in our household it could be transformed into “to cat down,” as in “He catted down his lunch and hurried back to the office.”

What phrases or idioms do you use for “eat fast”? 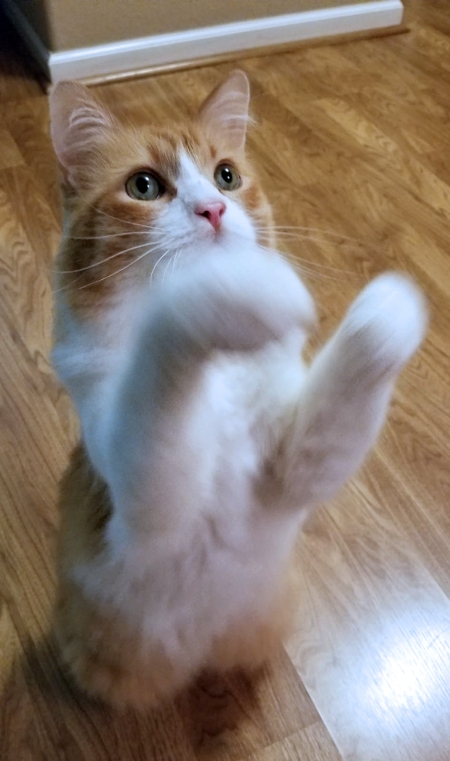 Images: treats – my own; all pictures of Rusty – from our wonderful cat sitters

34 thoughts on “Rusty the Cat: On Food and Treats”