A man is sitting on a railroad track.
Another man approaches him and says:
“Scooch over! I’ll sit next to you.”
A joke from my childhood*

Over the years, Rusty has learned that my vSO and I have al the things that are better than what he has: pates, meet, cheese, etc. that we eat are almost like Rusty’s wet food but better. The comforter we hide from him in our bedroom is better than the old one (a King size!) that we gave to him. And whatever we use to decorate our living space is a much better toy than anything we bring Rusty from a pet store.

But while he can’t get as much of our food as he’d like to, and our bedroom stays off-limits for him during the work week, there are some other areas of life where Rusty insists on being treated as equal (kind of).

On the sofa where my vSO spends evenings reading, surfing or watching, we have two pillows. During the day Rusty has access to both of them, but usually he prefers other parts of the house. While sitting on the sofa in the evening, my vSO usually uses one pillow to support his back and lays flat the other one for Rusty to sleep there. And every time when Rusty decides to join him on the sofa, he completely ignores the pillow conveniently laying flat, comes to my vSO and starts touching or even clawing the pillow behind his back – until he gives up and relinquishes the pillow. First we thought that Rusty considered one of these two as his and tried to reclaim it. But no: it’s whatever pillow is currently “in use.”

In the home office where we both work, if Rusty decides to join us during the work day, we have multiple places where he might sleep, including a special blanket on the desk to the left from my computer (as shown on the picture to one of the previous episodes of this series – Rusty the Cat: On Comfort Temperatures). I even tolerate for a while if he decides to plop himself down on my lap, even though it’s not particularly convenient if I need to write a document or do something else not related to reading or sitting on a meeting. But as soon as I get up from my chair, Rusty immediately occupies it and falls asleep. Knowing this his habit, I tried not to leave it unattended unless I would go to the kitchen (then Rusty would join me there) or plan to work standing for the next couple of hours. But recently Rusty decided that he shouldn’t be waiting for me to leave of my own accord. Instead, he would get on that blanket I mentioned and try to get between me and the seat back or keep touching my arm prodding me to vacate the chair. A coupe of days ago he did it while my vSO’s chair (which is almost identical to mine but without an additional pillow) was unoccupied and completely accessible! I gave in and worked standing for the next couple of hours (I have a sit/stand desk). 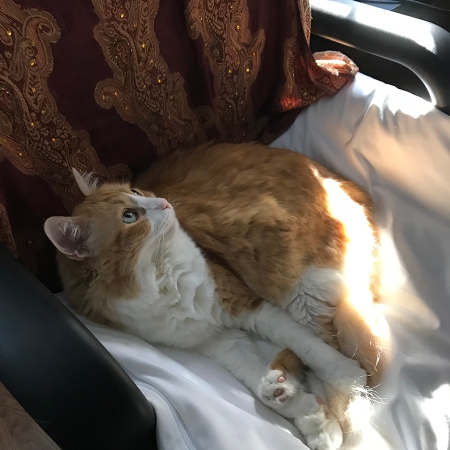 Rusty is so artless and straightforward in his pursuit of comfort, that it’s almost impossible to resist him. So, usually we don’t.

* For those of my readers who speak Russian, the characters in the epigraph joke were Pet’ka and Chapayev

31 thoughts on “Rusty the Cat: On the “Greener Grass””