Did you grow up with the Frog Prince or the Frog Princess? Not only I (and my whole generation, I think) grew up with the female version of this character but I don’t think I heard about the existence of the other one until I was in my late twenties. It’s especially surprising because we had other Brothers Grimm’s tales translated and published. It might be that the local version – The Princess Frog (or Tsarevna Frog) was one of the popular and loved folk tales: there were books, movies, animated films and predecessors of the modern audio-books – vinyl records. There even was a painting by the famous Russian neo-romanticism artist Viktor Vasnetsov. 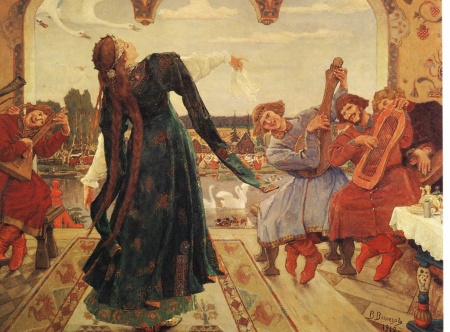 Just in case anybody is curious, you can read The Frog Princess in English. For the rest I want to mention that, interestingly, there were no kisses involved as well even though, as you can see, the heroine of this tale is older than characters of Grimm’s version. But our folklore also had that kissing frog theme played out in many ways.

Lipstick Queen is one of my favorite brands: I love their quirky names and colors (I previously posted about Hello Sailor and Black Lace Rabbit), and I’m constantly on the look-out for their new products. So when last year I saw their Frog Prince lipstick (since then they’ve launched two more product in that line), I had to have it!

While I liked the idea of a green lipstick, and from my experience with the lipsticks mentioned above I knew that on lips they do not stay blue or black, I wasn’t sure what color I’ll get from that green beauty, so when I saw the holiday set of mini-lipsticks, one of which was Frog Prince, I leaped.

The first thought that went through my mind when I looked at the swatch was that mini-size was a good decision: with my pale complexion green lips would look rather unhealthy. But since it was in my hands I had to try it. The transformation was amazing! On my lips it became pink – sheer but with enough pigment. That frog clearly needed a kiss to reveal its true self. I can see more princes in my future.

And since I can’t show you the results of that transformation, at least I’ll leave you with the picture of Rusty trying to paw that frog. 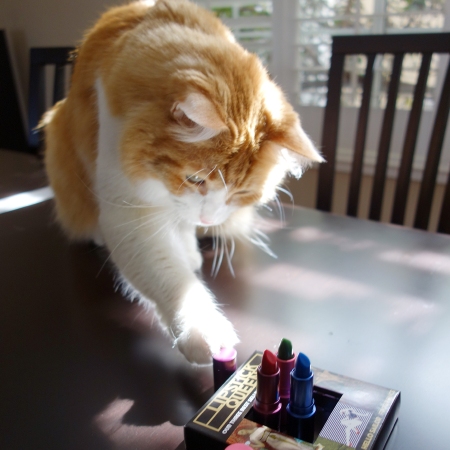 New post on my blog: Sunday Self-care, Episode 2: Fun Out Of The Sun