How was that for an attention grabbing headline? But if you think about it, you’ll appreciate me not using just the last part (I was tempted a little but then I thought of all that wolves business and decided not even to joke about such serious matters).

But back to the topic. It is true: Lipstick Queen had won me over when I saw online the first (for me) lipstick from the brand – Hello Sailor. I liked everything – the color in the tube, the name, a pin-up-girl-style packaging and, as I confirmed later, the tint on my lips. I’m on my third lipstick now; and once it’s finished, I plan to get the next one.

In four years since I said “Hello” to the first sailor, I found several more colors that I liked and adopted (see Black Lace in Tropics and Frog Prince(ss)’s Kiss). Both of them enchanted me with the name and the color in tube but after that I tried them first and then bought.

Recently one more lipstick from this brand caught my eye. Since now we have a Lipstick Queen counter in one of the close-by department stores, I went from testing and liking the color to appreciating its name: Goodbye. 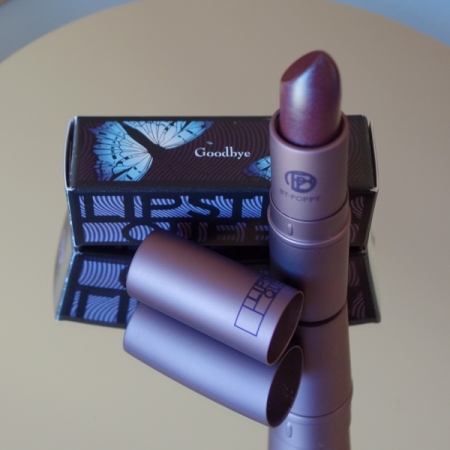 Describing a lipstick’s color is probably an undertaking comparable to describing perfume’s scent. Though I’m not good with either, I’ll try. Goodbye is darker than my other Lipstick Queen favorites, with more pigment – so it covers lips better than more sheer colors – but it has a lot more shimmer than my other darker gloss sticks (such as Laura Mercier’s Black Orchid), so it is more forgiving, and it gives a more even coverage. The color on the lips is dark berry or plum with brownish undertone and bluish sparkle. One coat gives enough hue to the lips; and then with each additional swipe you can build it up to a darker color.

Either a tube or swatches’ pictures do not do the lipstick justice. But I showed you the former, so now I’ll show you the latter as well (in comparison to two other lipsticks I mentioned in the post).

Other than with perfumes, do you pay attention to products’ names before you buy and use them?