For a very long time I haven’t approached Creed. There were several reasons for that.

First, when I didn’t know anything about the brand, its line-up in Neiman Marcus looked so unapproachable that I would keep passing the Creed’s counter long after NM itself stopped being intimidating (though it’s still too expensive for me to shop there).

Later, when I already knew about Creed, in my mind it was closely connected to the testosterone overdose coming from the certain forum and some Facebook groups: all those batch numbers and bottles parts’ details were just making me nauseous and didn’t inspire the exploration.

I was bored. There was absolutely nothing new for me to sniff at the local Neiman Marcus. Because of my previous success with gardenia perfumes – Guerlain Cruel Gardenia and Ineke Hothouse Flower – I was mildly curious about the new Creed’s Fleurs de Gardenia. They didn’t have it yet but it was too late: I “left myself open” and a Creed’s SA, who looked like she also was quite bored, decided it was her chance.

For the next fifteen minutes she was enticing me with different scents on paper strips, names and notes. I decided not to fight back and compliantly stood there nodding. I must have fulfilled my part of the SA-potential client dance, so she easily agreed to make a sample of the perfume that I liked the most – Jasmin Impératrice Eugénie. 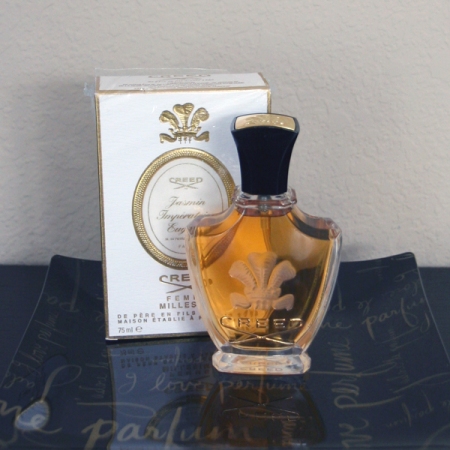 I wonder how Jasmin Impératrice Eugénie smelled 160 (one hundred and sixty!) years ago when, according to the official legend, it was created by Henry Creed II for the wife of Napoleon III, Empress Eugenie? I suspect it had been reformulated multiple times even before its public release in 1989 and definitely more than once since. But I’ve never smelled any of previous Jasmin Impératrice Eugénie reincarnations so no regrets here.

Official list of notes includes bergamot, Bulgarian rose, ambergris, Italian jasmine, vanilla and sandalwood. For a while I didn’t smell jasmine in Jasmin Impératrice Eugénie – until I tried it in parallel with Dior‘s Grand Bal. Now I can clearly detect it. But still for me this perfume isn’t about jasmine. This perfume is jasmine wrapped into and creamy sandalwood with just a hint of vanilla. I can’t detect rose but I’m not too good with that note when it’s not in a leading role. Jasmin Impératrice Eugénie is very smooth and well-blended. It has a good projection so it’s not one of those perfumes in which you can bathe. It stays on my skin for about 8 hours during which it doesn’t change much to my nose (though I’m positive that at least a couple of my readers would be able to parse out more distinct stages). I like this perfume very much.

My vSO also likes Jasmin Impératrice Eugénie. I know that not because he gave it to me as a New Year gift (I had a hand in it) but because he complimented me on three separate occasions (which doesn’t happen too often) without knowing what I was wearing (which does happen a lot).

Do you have a favorite Creed perfume?