What is the first thing that comes to mind when you hear the word “Ball”? For me it’s Cinderella and her Glass Slipper (though in the version from my childhood it was a Crystal Shoe, which sounded even more romantic), the first ball of Natasha Rostova from War and Peace and a strange game we would play as kids.

The host would start with a rhyme (loosely translated):

Lady of the Manor has sent you some money.
She has instructed: you buy what you want;
Don’t wear black or white during your jaunt;
“Yes/No”’re off-limit and even when funny
Don’t dare laugh or smile,
Don’t twitch at all!

Will you go to the Ball?

From this point participants will answer different questions about the imaginary ball, their attire, means of transportation and so on and so forth – until one of them slips the forbidden exclamation or adjective. You would think that this game is like Tic-tac-toe: once you know the algorithm it should end up in a tie every time. But no: kids’ minds are very inventive and persistent. “Are we there yet?”

With all that in the background, could I not be predisposed to like Grand Bal from Dior’s La Collection Privée?

Grand Bal by Dior – created in 2012 by Francois Demachy, notes include bergamot, orange blossom, jasmine, ylang-ylang, musk and sandalwood. I really-really-really wanted to try it. I contacted a friendly SA from a Dior’s boutique and he was kind enough to send me some samples of Grand Bal.

The first attempt wasn’t successful: the package had arrived with two completely smashed vials. Rusty had inspected the content of the envelope and found it interesting for playing with (I didn’t allow him to proceed with that) but useable only as a room freshener (I kept it for a couple of days in that role). 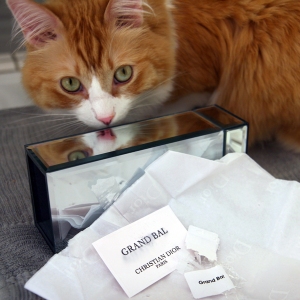 The second time was a charm and I got a chance to wear Grand Bal on the skin. It’s a lot of jasmine. When I tested Jasmin Rouge by Tom Ford I thought I didn’t like jasmine as a dominant note in perfumes. But unlike Jasmin Rouge and Sarrasins by Serge Lutens that both come out unclean on my skin Grand Bal smells very clean, uncomplicated and easy flowing. It reminds me of this Waltz of the Flowers scene from the animated film from my childhood:

I know that there are notes other than jasmine in Grand Bal but for my nose jasmine dominates the composition allowing all other components to play an entourage on its appearance at the ball. And only when I smell it in parallel with other jasmine-intense perfumes I detect orange blossom and realize how different all those jasmine perfumes are. It’s hardly an original thought but it hit me. Probably because on previous occasions of testing those perfumes I just thought habitually: “It’s a lot of jasmine…”

Will I go to the ball for a bottle? Yes No I don’t know yet. I will try wearing the remaining portion of my Grand Bal sample “for real” (sprayed multiple times and not only on my wrist) and then decide.