Last month I visited 29th annual flower exhibition Bouquets to Art 2013 at the San Francisco Fine Art Museum de Young. Compared to the last year’s exhibition I had a feeling there were slightly less presenters and at least as many visitors if not more, which was a disappointment since we went to a members only evening viewing.

While we were there I thought that this year’s arrangements were less interesting than those from the last year’s event but later at home going through all the pictures I changed my mind. Both years there were more and less artistic interpretations, direct floral reproductions and just abstract bouquets vaguely matching the assigned art piece.

First I’ll show you several bouquets for the same paintings as I showed last year:

The compositions I haven’t shown in 2012 post and their counterparts from 2013 (click on each image to enlarge):

Last year I also offered a puzzle – matching a bouquet to one of two paintings. This year I decided to make it slightly harder: two out of four compositions below are this year’s take on the same paintings I showed in the post Bouquet to Art 2012: Craft Imitates Art. 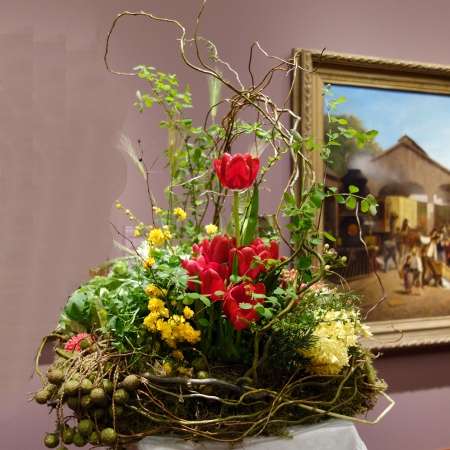 Can you tell which one goes with which art piece from the last year’s post? (You can either number pictures in the original post going from the top or use the name you can see if you hover over pictures there.)

New Saturday Question post on my blog: What Do You Think About “Unusual” Perfume Colors?