Long Live Fluffy Towel
And Toothpowder
And Fragrant Soap
And Fine-toothed Comb!
Let’s wash and slosh,
Bathe, dive and tumble
In basins, in bathtubs,
In ocean and river,
Always and everywhere
Hurray for Water!

As an epigraph I used loosely translated closing verses of Moydodyr – the poem for children by Russian poet Korney Chukovsky published in 1923. Moydodyr (Wash’em’clean) is an anthropomorphic washstand, a self-proclaimed commander of other washstands and sponges, who teaches an untidy boy (and the readers) “the virtue of hygiene“.

I doubt that in my childhood there were too many kids who didn’t read that poem or watched the cartoon. As Wikipedia correctly states, “Moydodyr character became a symbol of cleanliness.” But I must say that for the country, several generations of which grew up on this poem, we were quite unwashed masses. I’ll spare you horror stories about hygiene norms and routines from those times: hopefully, many of those are left in the past. But I want to share some of the less detestable but rather peculiar memories. Soaps.

I don’t know how it was in early 20s when the poem was written, but by 80s books were probably the only source of fragrant soap. Soap produced in the USSR was mostly functional but not something that would bring joy to any of your senses: usually it was a rectangular bar of some undefined light color and, if you were lucky, a faint unpleasant scent. I suspect that my dislike of natural/organic/handmade soaps has a root in those childhood memories. 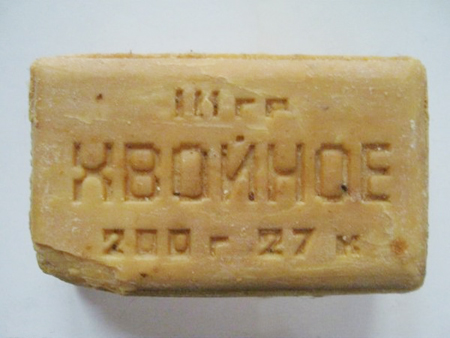 In today’s economy whenever I read in a product’s description “Imported”, I immediately assume that it’s a euphemism for “Made in China” so in my mind it’s a disparaging attribute: had it been a “respectable” producer, it would have been named specifically – “Made in Germany/France/Italy/the U.S./etc.” Faceless “imported” usually means “a country where labor is cheap and quality is corresponding.” But when I was growing up that property had the opposite effect: it would immediately raise the status of the item. “Imported X” was universally considered of a better quality and more desirable than locally produced X. “Imported shoes”, “imported furniture” and “imported soap” are just a few examples. Usually it didn’t even matter from where those were imported (unless it was perfume, in which case it had to be French).

If anybody was lucky enough to get them, those fragrant, perfectly molded and beautifully packaged representatives of remote civilizations “imported” soaps would usually lead a life of leisure surrounded by the finest things… in underwear drawers staying there for years – until finally making a guest appearance in the bathroom. I mean, appearance for some special guests – and only after that fulfilling their utilitarian destiny.

The situation with soaps (and other imports) had significantly improved even before I left for the U.S. Camay, Palmolive, Nivea and dozens of other soap bar brands came into our lives and became something mundane and ordinary – just like it should be. And since I haven’t lived there for a long time, I don’t know if the next spiral of craziness (all-natural, artisan and such) has reached them already.

But even now and here it’s hard to get rid of old habits: almost three years have passed from the time Rusty and I demonstrated to you the wonderful linden-scented bar until I let the first drop of water touch it. It still smells nice but I think it dried out a little while waiting for its show time.

Amouage Dia soap ended up in my stash by chance: there was a closeout sale at the online store and I just couldn’t pass on a great deal. For the last couple of years I was trying to decide when the time would be right to start using it: it’s so luxurious that it felt wasteful to open it without a special occasion. Well… It’s still in its original cellophane. 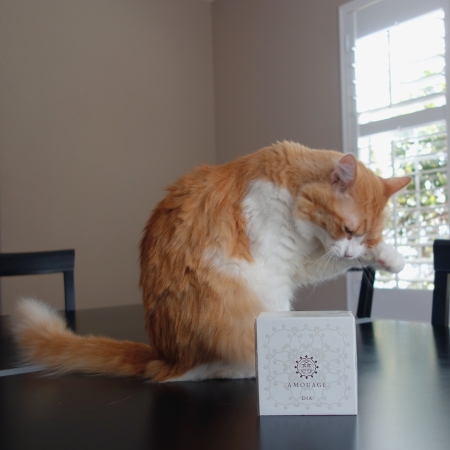 I wanted to see what Rusty thought of the Dia soap’s scent. I’m not positive but does it look to you like he’s trying to show me the proper way of cleaning myself without a soap?