As I’ve told in one of my stories before, I had found my perfect lavender perfume – Lieber Gustav by Krigler. But my love to this plant in general and my hand-made sachet losing its scent after a while, keeps me on a lookout for more lavender-based perfumes and other products.

When I read that Jo Malone was about to release a new limited-edition collection based on lavender, I could barely hold myself till it was available in a store: I like lavender, I have a soft spot for the brand, and have you seen those purple tops for the bottles in that collection?

Had the brand released this collection as a set of three 9 ml bottles, I would have bought it. But I’m yet to see any of their limited editions done in that manner. Silver Birch & Lavender didn’t work for me (I would have still wanted it as a part of a set though). The other two smelled nice, but Wisteria & Lavender disappeared from my skin within 30 minutes, which isn’t acceptable even for Jo Malone. So, on my request, a friend bought for me Lavender & Coriander in a Duty-free in Heathrow airport, which, in combination with a nice purple cup, made that bottle even more attractive than it was four years ago when it was released first as a part of their garden herbs collection (though, the green bottle they put it in then was also quite appealing).

But the item that attracted my attention was the fourth item in the collection – Lavender & Musk Pillow Mist. I know that Jo Malone previously had linen sprays and ambiance scents, but this was something new and interesting. And I wasn’t the only one who thought so, I discovered while looking for it: not only it was gone from the Duty-free, but it was sold out in most online stores.

But I persevered, found and ordered it. And then the lock-down happened, and the package, which couldn’t be delivered to the closed office, went back to the seller (and it has never re-appeared on their site, so I couldn’t reorder it).

Since I wasn’t prepared to pay almost twice the price for it on eBay, I accepted that it wasn’t meant to be. (Who are those people who would?! It’s not a discontinued perfume that someone got to love and cannot buy any longer – so, why to pay that much for something you have no emotional attachment to?!) And then brand’s site restocked the complete collection – so, now I’m a happy owner of a bottle of Lavender & Musk Pillow Mist. 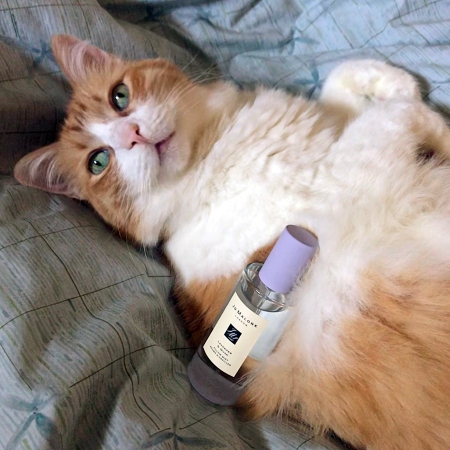 It’s not an overpowering lavender (I wouldn’t mind it to be stronger). Lavender & Musk Pillow Mist is soft and warm and cuddling – just what you’d expect from a pillow spray. It is completely unnecessary – and probably it’s a part of its appeal. I don’t think I’ll ever repurchase it, even if it is re-released. But I’ll be using it while waiting for this year’s lavender season: if I manage not to miss it, maybe I’ll try to recreate that Diptyque’s magic wand.

28 thoughts on “In the Search for the Perfect Lavender, Take III”