Everybody knows that people in the Perfumeland* are wonderfully generous and kind – towards friends and oftentimes to other members of their group who they don’t know too well.

I got my first sample of Serge Lutens Chergui from Suzanne of Suzanne’s Perfume Journal(read her perfect explanation why to wear Chergui in summer).

I liked this perfume though until recently for me it was a cold weather perfume. I finished Suzanne’s sample, then one more sample and was thinking of getting a decant, when Vanessa (Bonkers about Perfume) sent me her partial bottle of Chergui as an unofficial present for my birthday. I was happy to get it in a bottle: even though those take more space than decants, in the last years I noticed that I tend to favor actual bottles.

Several months later, while we were discussing samples exchange, Vanessa wrote to me that she would also send a box from Chergui that she recently found… As I read that e-mail in the office, I was anxious to get home: I clearly remembered that the partial bottle had come with a box…

I got home, confirmed that I wasn’t confused and even sent Vanessa a proof of having that box. 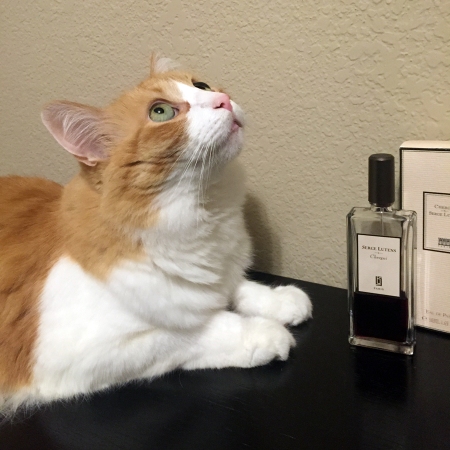 Vanessa had no recollection of how she came to own that second box; and since she had no use for it she used it to send samples to me, making the answer to the post office clerk’s question “Are the bottles in their original boxes?” at least partially truthful: the box was original indeed.

Chergui is one of rare perfumes honey in which does not go urinous on my skin. As I started thinking about this post, I wore Chergui a couple of times, and I have to agree with Suzanne: it wears nicely in the hot weather. Too bad I cannot use a back-up box to even better protect perfume from that heat. I’ll have to rely upon a more conventional method – an A/C. I couldn’t even interest Rusty in checking it out: he clearly didn’t think it was that interesting the first time around when I tried to make a “proof of life” picture shown above. 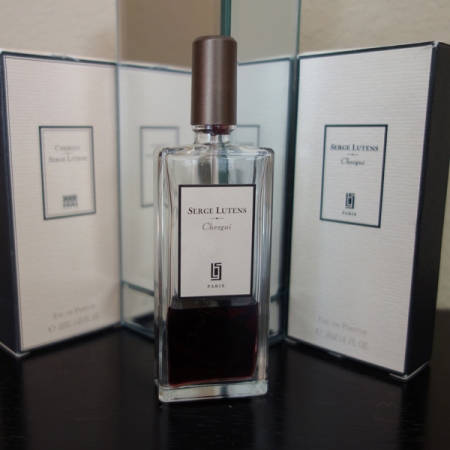 Speaking about back-ups… Are you getting any for your Serge Lutens favorites pre-repackaging/reformulation/moving to the Exclusives Collection?

* Of course, Perfumeland isn’t unique in that respect: people inside other groups with similar interests behave that way. But I’m writing about my current interests, so forgive me this … hmm… what would be the right antonym for “generalization” in this context?