Reading adventure or historical fiction books as a child I couldn’t comprehend the significance of death. Characters being threatened with death would betray their allies or help enemies – and that was very strange to me: it wasn’t a torture or a threat towards their loved ones, it was just death, what to be scared of? It was definitely not a good enough reason for treachery.

I read a lot of books. And still remember having all those thoughts. And I remember that finally the realization of the value of life came to me. I was ten or eleven. I don’t remember what happened and what caused that change but I remember that it was an epiphany.

When I came across information about De Profundis by Serge Lutens for the first time the idea seemed appalling: I’d just experienced a couple of losses and the thought of a perfume somehow linked to death felt wrong. The only reason I wasn’t completely offended by it was Serge Lutens’ age: I told myself that it was probably fine for the man, who was statistically closer to the final destination than I or people I love, to toy with death. But, as I said in the comment on Asali’s review of De Profundis (All I am – a redhead), I didn’t plan to test it because of the connotation.

Soon after that I won a decant of another perfume on the same blog and Ines was kind enough to send me a sample of De Profundis also. I’m grateful to her because knowing how stubborn I might be I think I would have avoided trying it otherwise. I loved De Profundis from the first application. It smells so unusual. I adore the green bitterness of chrysanthemums even though I never really liked the flower itself. When I was choosing a bell jar of which perfume I wanted to add to my collection De Profundis was the only one I considered. 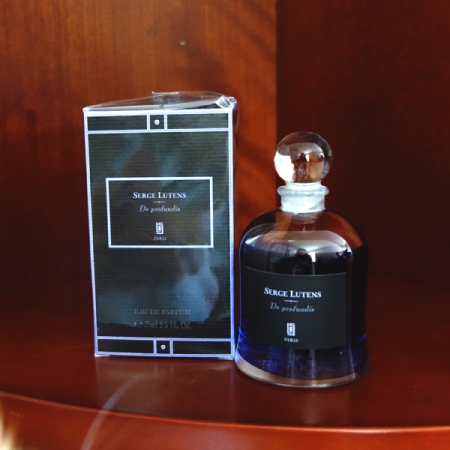 Where I grew up chrysanthemums weren’t associated exclusively with funerals though it was one of the common uses for the flower. For me a much stronger association is September 1st – the all-national first school day of the year. On that day all students would bring bouquets for their teachers. Chrysanthemums were popular flowers on that day.

September 1st would start with students from all ten grades (there was no elementary/middle/high school separation) gathering in the school yard, in dress uniforms. After some official greeting words from the school director and other stuff members, a boy from a graduating class would pick up a tiny girl from the first grade and would carry her around the yard as she would be ringing a bell to symbolize the First Bell in a school year – the beginning of a new life, school life, for all first graders.

I didn’t get to ring that First Bell (or the Last one in the end of the year) though I secretly wished I had been chosen. But now I got my personal (and personalized!) bell [jar]. And I choose to see De Profundis as homage to life.

Images: De Profundis – my own (can you find Rusty on the first one?); September 1st – from my school’s classmates group, author is unknown.