That day my morning started at 6:30, a good three hours before my comfort waking-up time and at least ninety minutes before I force myself into the regular work day, with a call from the office. While I was trying to ascertain the problem and decide who else to wake up, with a sudden clarity I realized what was that pleasant scent that haunted me from the sleeve of my bathrobe for a couple of days:
Le Parfum Denis Durand Couture by M.Micallef.

A PR person of M.Micalef brand had contacted me several times in the past offering samples for the review. I truthfully explained that I did not do actual reviews, even for perfumes I liked, if they din’t come with a story – and I never knew when (or even if) I’d think of one. But they still kept sending me samples that didn’t speak to me (even though I liked some of the perfumes). So when they’ve announced M.Micallef’s release of Le Parfum Couture Denis Durand and suggested to contact them for a sample I decided not to – since I felt bad enough not writing anything yet.

But I got Le Parfum Denis Durand Couture sample from the company anyway. I avoided reviews that started to appear on the blogs until I could try that perfume (sorry, guys and girls – in case you wondered why I didn’t comment).

When Le Parfum Couture arrived, I sprayed it, sniffed and told to myself: This is how agarwood perfume should be done! Not too much, not too sweet – just right.

How do you feel when you do a blind sniff, clearly smell some note but later find out the perfume doesn’t contain it? Since I don’t think much of my nose I don’t get upset when it happens. I was rather surprised – not as surprised as when I actually get the note right (then I feel both surprised and proud of myself) but still.

When I started reading other bloggers’ reviews, I discovered that I wasn’t alone: many reviewers reported smelling agarwood (oud) in Le Parfum Denis Durand Couture. If you haven’t read theories/explanations on what we all smelled in the perfume, I recommend reading the first two links below and choose which explanation works for you.

What I want to point out is that for all intents and purposes we can say that Le Parfum Denis Durand Couture has agarwood among its notes. How did I figure? Most modern perfumes do not use real agarwood anyway (as well as many other real notes but it’s a different story) so who’s to say that this aroma chemical or accord is less oud than any other one if we all smell it like such?

I wish I could take a picture of Rusty with that beautiful black-laced bottle. Maybe one day I will since I like Le Parfum Denis Durand Couture a lot. But for now I’ll leave you with a picture of a sample vial – one of the 10 that you can win if you live in the U.S. (thanks to Jeffrey Dame at Hypoluxe, an official representative of M.Micallef in the U.S.). 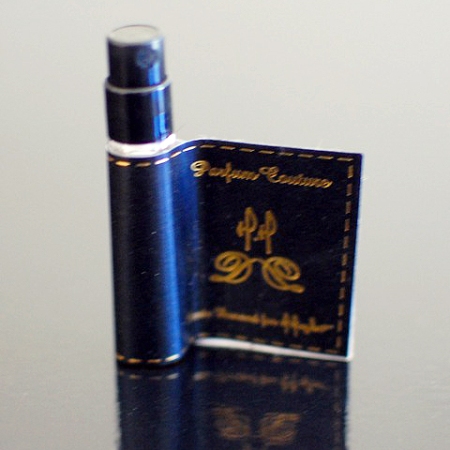 To be eligible for the draw all you need to do is to leave a message saying that you live in the U.S. before 11:59PM on Sunday, July 21. You do not have to write anything else (but do not stop yourself if you do have what to say). I’ll choose winners using some random method.

111 thoughts on “M.Micallef Le Parfum Denis Durand Couture: The Oud That Wasn’t There”