… the sense of smell can be extraordinarily evocative, bringing back pictures as sharp as photographs of scenes that had left the conscious mind.
Thalassa Cruso

I like Jo Malone‘s colognes. I own more full bottles of this brand than of any other. And then some decants and sample sprays. One way or another there are fourteen scents by Jo Malone in my collection. Not being familiar with the limited edition concept in the past, I’ve missed some of the perfumes I wish I haven’t. So this time I went to a store as soon as I read the new limited edition Tea Collection by Jo Malone became available. 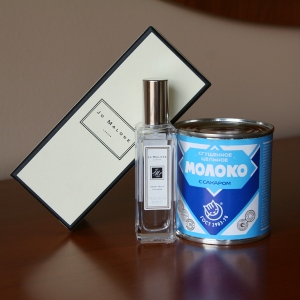 It was an interesting idea – tea party components in a bottle. I concentrated on two “main” scents – Assam & Grapefruit (bought it) and Earl Grey & Cucumber (still thinking about getting it); I dismissed Fresh Mint Leaf and Sweet Lemon as nice but too simple; as to the Sweet Milk scent, it piqued my curiosity because it smelled … differently but I didn’t think I would like it. I sprayed it on my wrist just to see how it developed on the skin. And as I was sniffing it repeatedly, not only the scent but also my childhood memories started developing. And in no time my mind conjured vivid pictures from the past.

As a child I usually spent my summer school breaks at my grandparents. Those were wonderful summer months filled with great things: I could read long after a midnight and then sleep as late as I wanted; I could eat endless cherries off a tree and pick the best strawberries from my grandmother’s garden; I spent most of my days with friends who lived nearby – running around, playing games, swimming in a river or going to movies. One of the “great things” was a special treat, which we all were getting from time to time: a can of a sweetened condensed milk. Even though condensed milk wasn’t too expensive, it was really hard to come by in stores; and usually adults tried to save those cans for baking (there were a lot of recipes that used it) – that’s why a whole can of a condensed milk, which you could eat all by yourself, was a special treat. What made it even better, with two small holes made in its top part (one – to drink from, another – to help the flow) the can would become a perfect portable dessert container. It was easy to eat (drink) from it, carry around and find where to put it to free one’s hands.

Turning several pages of the imaginary album, I’m fifteen. My school choir group arrives from a two-week seaside vacation trip that we won in some competition. It’s late and because of that usually busy railway station is much less crowded. Everybody’s parents are there to meet their kids. Everybody’s but mine. I don’t remember exactly what happened – my mother either forgot the date I was to come back or couldn’t get tickets for the right date, – but they returned from visiting my grandmother only the next day. That night my friend’s parents gave me a ride home. At that age I was very independent and emancipated already, but being alone in the empty apartment with nobody waiting for you, preparing your favorite food and listening to all your vacation stories felt very depressing and sad. I felt lonely and abandoned. In a kitchen cabinet I found a can of a condensed milk, brewed a large cup of black tea and spent most of the night reading, drinking tea and eating sweet milk. It was very comforting and consoling. And, as it usually happens with night fears and concerns, in the morning everything seemed fine (as it was).

Sweet Milk by Jo Malone smells exactly how I remember the scent of that condensed milk from my childhood. I bought my bottle long before it became the most popular cologne in the Tea Collection and was sold out everywhere. Notes for that perfume created in 2011 by Christine Nagel include anise, bergamot, heliotrope, caramel, milk, almond, musk and vanilla. It’s not a perfume you want to wear with an evening dress or to the important business meeting but it’s suitable for the most other occasions. It’s warm and comforting and … sweet.

Carol from WAFT and I have decided to do a joint/parallel post about Sweet Milk cologne so check out her review.

As always, feel free to post a link to your blog’s post(s) related to the topic.

Image: my own
“Here’s a photo I’ve been looking for…” © Vonda Shepard , Neighborhood.

33 thoughts on ““Here’s a photo I’ve been looking for…”: Sweet Milk by Jo Malone”