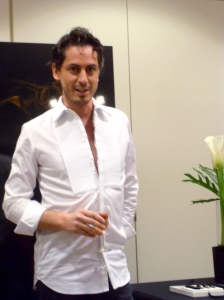 No-no, I didn’t catch Kilian Hennessy (the creator of Kilian Parfums) though I met him last Saturday at Saks Fifth Avenue during the join basenotes-NST San Francisco Spring Sniff event.

It was a private group presentation in the overcrowded by us small room on the second floor of Saks. We were strange visitors for that place but the service was very courteous (which I cannot say about the Hermes boutique we visited earlier that day where one of the SAs almost shoved us aside saying that she needed to make a sale!). Those of us who came earlier got chairs the rest had to stand (most didn’t mind). Champaign was served and then, after a short announcement by the very beautiful Marketing Director of the brand (I’m not sure I remembered her title correctly), there he was – Kilian himself.

What can I say? He’s a professional charmer. Artistic, handsome, well educated and not to the least extend snobbish or pompous. He has a charismatic smile (grin?) and he mastered the skill of making an eye contact with the auditory the way that you feel as if he’s talking and smiling to you personally. I have no idea how he is in a real life (and usually I do not care about that part with most celebrities) but I applaud his public social skills. He is very likable.

Mr. Hennessy told us couple of carefully chosen anecdotes: one about a friend who habitually wears Straight to Haven and the only occasion when he decided not to, was before going to the hospital for a surgery; and another one about an incident at a restaurant where, if I remember it correctly, somebody recognized one of his perfumes (which one escaped me now) that his friend was wearing and proceeded on licking it off that friend’s neck. He got a lot of laughs from us. We were a very responsive group.

After the presentation Kilian was signing bottles of perfumes that people bought. I wasn’t tempted to buy anything only because by the strange paths of destiny five months ago when I got some samples from Saks for this line they were out of those two that I think I might have liked enough to buy just for the purpose of getting an autograph. Now I got a sample of one of them (Love and Tears) so I’ll be prepared for the next time. But to describe the effect he had on me I should say that I decided not to give away two of the samples of his perfumes that I tried, didn’t like and brought with me to find better hands for them. I took them back home and decided to give them another try – that was how Killian’s passion to his perfumes affected me.

In my mind that was the best part of the Sniff event, but there were many other pleasant moments – meeting with interesting people, visiting different stores (Diptyque, Hermes and Chanel boutiques, Saks, Barney’s, Bloomingdales and Nordstrom perfume counters), meeting three perfumers (in addition to Kilian we met Delrae Roth and Ineke Ruhland). 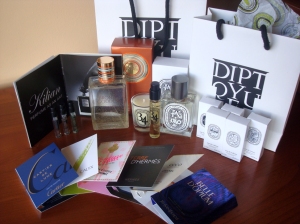 Catch of the Day

I bought two bottles of perfumes – Tam Dao in Dyptique’s boutique (they were really great to us, so I decided to buy there the perfume I planned to buy for a while even without realizing that there was a very nice gift with the purchase) and the last bottle of Bronze Goddess at Bloomingdales (Dee, do you see what you’ve done?). The picture doesn’t show seven hand-made samples from Nordstrom but I have them (while everybody else was trying Ineke’s perfumes, all of which I’ve tried already from the discovery set I have, I could have made even more testers but I just couldn’t find anything else I wanted to try).

It was a long and eventful day which I enjoyed tremendously. I hope there will be more such events in my area in future.

As always, feel free to post a link to your blog’s post(s) related to the topic.

Images: my own (I wish I had a better camera with me at the event).

29 thoughts on “Catch of the Day: By Kilian, Diptyque, Ineke and others…”