For many years perfumes from the Hermès house were completely out of the sphere of my interest. I tried some of them on several occasions but didn’t find them attractive. Then one day I smelled Rocabar and it became my favorite men perfume for years. I never wore it myself but I loved it on my vSO. Because of that affection for Rocabar I decided to give Hermès another chance (not that it was begging for it). Unexpectedly I discovered that I grew fond of Un Jardin sur le Nil. If I were to name my favorite perfumes (and I still plan to do it in the nearest feature) Un Jardins sur le Nil would not probably make it into my Top N list. But my bottle has less than a quarter left in it and as it gets warmer I catch myself thinking about it more and more often.

Over the years I approached both Un Jardin en Méditerranée and Un Jardin apres la Mousson again and again and consistently didn’t like them. I do not know why I kept trying: with most other fragrances I give up after a very limited number of attempts, but with these two I was insistent. A month ago I sprayed Un Jardin en Méditerranée on a blotter and liked it. I’m still building up the courage to test it on skin: I do not have that perfume’s sample at home but every time I come by it in a store I’m either wearing something else or have other plans that do not involve having access to hot water and soap (in case the experiment doesn’t go well). But I will get to it eventually. Un Jardin apres la Mousson still leaves me absolutely cold. 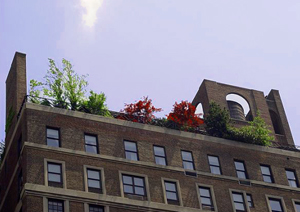 The newest Jean-Claude Ellena’s creation for the Gardens series started for me as an idea: I read an article on the upcoming release and liked the mental picture I formed in response to that news. I should admit that Paris wasn’t in that picture. For some reason garden on the rooftop in my mind is strongly associated with New York. An apple note in Un Jardin sur le Toit’s description made this association even stronger (an apple – Big Apple – NY) but at the same time it made me wary of how this note would be crafted into the perfume (Big Apple – Be Delicious – Ugh!).

As a child I adored cheap artificial green apple smell in deodorants, soaps and chewing gums. As an adult I’m running away from this and other exaggeratedly chemical fruit smells in any products let alone perfumes. Un Jardin sur le Toit does smell of an artificial apple (at least for a while). But it doesn’t smell cheap at all. I would prefer not to have either an apple or a pear note in the perfume whatsoever (a citrus can stay), but not because I do not like how they are done but because I do not see them in my picture of a rooftop garden. Even if Mr. Ellena had managed to capture the most true-to-life fresh August crop apple smell I wouldn’t be able to place it into the composition. A garden on the rooftop in the middle of the concrete jungle has beautiful bright flowers, colorful bushes, mini trees (orange or lemon tree might be fine on a San Francisco roof) and maybe some fragrant herbs but no apple trees. And I do not want to look for a hidden reference to the Garden of Eden with its Tree of Knowledge.

Will I wear it? I could, it’s perfectly wearable. But I do not see the need of having them both – Un Jardin sur le Nil and Un Jardin sur le Toit. So when my bottle of the former is empty I’ll just buy the next one. Unless, of course, Hermès decides to release all four gardens as a set in what I call a perfumista sized bottles (15 ml). Four Wonders of Hermès – not a bad name for the set, don’t you think? Or is a reference to the Hanging Gardens of Babylon to subtle for the mass market?

For more [real] reviews see Olfactoria’s Travels, Beauty on the outside, Now Smell This and 1000 fragrances.

11 thoughts on “Four Wonders of Hermès”

New post on my blog: Sunday Self-care, Episode 2: Fun Out Of The Sun