Since this post isn’t a review, I didn’t want to add the author’s name to the title, but still I bring it to your attention that this post is written by Narth. (Undina)

I write to you in hard lockdown. My state of Victoria has declared both a State of Emergency and a State of Disaster. If you find the double declaration confusing don’t worry, so does everyone. Double states of badness are upon us! We have a curfew and cannot travel more than 5 km (3 miles) from our house. Everything is shut. The post office has called for volunteers. The children are completely glazed over and exhausted from doing schooling online for months and I’m sure it is even worse for the teachers. We’ve been in varying stages of this new normal for 6 months now. Mental health seems to be a tug of war between trying to throw ourselves into new interests and claim and reclaim who we were during the before times. “Don’t try this at home kids!” is an expression that no longer has any relevance to anyone.

My perfume love is just as battered and bewildered as the rest of me. I’ve always said, “I wear perfume for myself, not for other people”, but now that there literally are no other people (!!!) I’ve seen that this is only a half truth. I wear perfume as a tool for interacting with other people, for moving through public spaces, for deciding who I am that day. I always knew this, but I am suddenly painfully aware that my identity for a day, an evening, has been a core reason for my wearing perfume. It isn’t just that sillage is irrelevant, it’s that choosing who I will be today is irrelevant because every day is the same. A lifelong introvert, I never realized just how much time I spent with others until suddenly I am alone. All my whining in the before times that “I wish I could have just one day to myself” has come back to haunt me.

In the beginning of this lockdown I went a bit mad with the online purchasing. It was easy to rationalize a blind buy bottle, after all I wasn’t eating out anymore, and I was saving a fortune in train fares. A steady flow of books, perfume and wine in the post was surely good for me, I wanted something to look forward to! I was even buying “Mystery” wine because I felt like I needed a surprise to counter the tedium of sameness. Thank goodness there were no Mystery perfume offers, which would have been even worse than some of my blind buys I suspect. While waiting for the highly delayed post, I began hardcore going through my samples, I was going to catalog and take notes on them all, I was going to wear multiple samples a day for science! This kept me occupied for all of a week and then, suddenly, I was over it. I spent a month wearing only a handful of favourites, regretting blind buys and wondering if I could exist on Penhalgion’s Sartorial and one random rose scent for the rest of my life. In between these quite obsessive phases were long weeks when I forgot perfume existed despite my desk being covered in it.

This is a post with no conclusion. My current resolve is to sell some of my mistakes and to try and bring balance to the Force, not just in perfume but in my other interests. Reading ten hours a day or power watching K-dramas until 2am is also a little unbalanced. In the beginning we were all okay about that, these were strange times and we encouraged each other to just do that thing, that thing that felt good. But the strange times are now the new norm. Where to from here, fragrance my friend? I have plans to start matching my perfume to books and tv shows as a kind of substitute for happily overthinking what to wear to the pub for Trivia night. I’ve worn Mugler‘s Alien to every sci fi movie I’ve ever been to since it came out 15 years ago, so these plans are not without precedent but… perhaps without a (sillage) audience they feel a little forced. I need my perfume mojo back, friends! 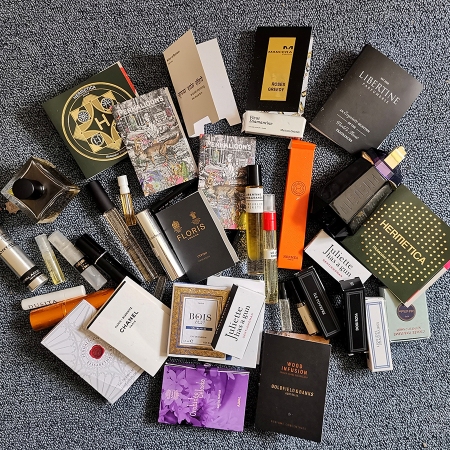