Even though there were at least a couple of guest writers on Undina’s Looking Glass, over the last couple of years I was a sole contributor, so for a while I will be reminding my readers to look at the By line (Undina).

“You’re a perfume snob”. So said my friend as we drove to lunch together. I was quite taken aback, “What, no! I’m not!” but my friend continued on seemingly enjoying herself. “Oh yes, you are, you are absolutely a perfume snob!”

This was hard to take, especially so as I was asphyxiating under a roiling cloud of Estee Lauder‘s Youth Dew, my friend’s favourite perfume. I had given her a bottle as a gift, even though I feared being in just this situation, trapped in a car full of Youth Dew, which I very much disliked. Neither youthful nor dewy to my nose, I thought it did not suit my friend at all but she loved it.

Trying to prove my lack of snobbery I informed her that I was wearing Britney Spears Curious in Control (a pleasant apple custard scent), so therefore I could not possibly be a snob. She laughed, “Oh, you’re 100% a snob!” Ugh, this was getting uncomfortable. I started worrying that offering up Britney as an example of my willingness to embrace  the cheapest celebuscent was actually proof of my snobbery, “Some of my best friends are celbuscents!” But then I got a grip and realized I didn’t have to prove myself to anyone. The word my friend was probably looking for was aficianado aka someone who knows too much and talks too much on a topic other people don’t deem worthy of a conversation. Sometimes (who am I kidding, most of the time) it’s better to just agree that Youth Dew is enchanting without harping on about oakmoss. It’s straight back to my childhood when I thought spouting facts about krill was a good response to a kid saying “penguins are nice”.

I love perfume and I love smells, some days it feels like I love every single smell in the world. I try to appear a little less of a weirdo, to pocket the leaf or cheese rind or odd flinty rock and not inhale them deeply in front of people. I think many of us who started out on this perfume journey because something smelled pretty have ended up here. Nose deep in a stout thinking about oud. Analyzing funk and and oils and laughing when connections are made. Once your brain and your nose start having deep and meaningfuls, there’s no going back.

So I must declare I am not a snob. I am just someone with too many facts and too many opinions on too many topics and one of them is perfume. 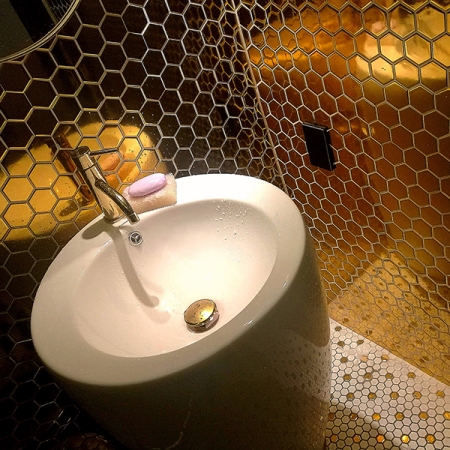 Photo is of my GOLD PLATED BATHROOM. Not really, but did you know that pure gold has no smell of its own?

25 thoughts on “Fun in the Car with Youth Dew”