What does a perfumista do while being sick to the degree that wearing any perfume is temporary out of question? She thinks about them. And thoughts might flow in an unpredictable direction.

But first let me explain what I meant by the title. Did I mean samples of bad perfumes or perfume samples that are bad? Either. Of course, “bad” is a subjective term: tastes differ, and for almost any perfume there is someone out there who adores it. But we all know that some perfumes get everyone’s love while others pass by to be forgotten half a year later. These “others” are those that I called “bad perfumes.” Besides, most people (though, not all) prefer spray samples, hence, the other ones (those messy 0.7 ml dabbers from Luckyscent and other similar places) are “bad samples.”

What I’ve noticed over years of swapping perfumes: when it comes to exchanges not with friends and usual “sparring partners,” percentage of perfumes that I didn’t care for at all would go up significantly. When I started thinking about it, it made sense. I’ll share with you my train of thought. 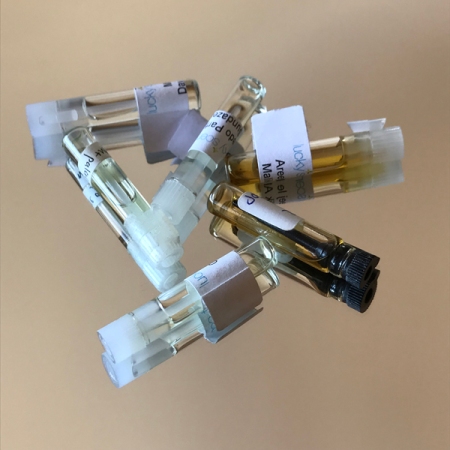 A perumista (let’s call her P.) gets a sample, tries perfume and likes it. If she doesn’t love it enough to buy, P. wears it until it’s finished (or keeps in her collection planning to finish it eventually). This sample never leaves P.’s possession.

If perfume goes onto the “to buy” list, P. continues using that sample waiting for a bottle, especially if it’s a convenient spray sample. By the time that bottle finally joins P.’s collection, the sample is either gone or is so depleted that it feels wrong to send it to anybody else. The sample stays with P.

Unless it was a dab sample because then it wasn’t worn as much; or let’s say it was, but even a 0.25 ml in a dab vial is still suitable for testing, especially it it’s a “freebie” that P. adds to a split or a swap.

On the other hand, if P. didn’t like perfume, a nice spray sample of perfume that everyone else praises has a better chance to go into a “maybe” or “try again later” pile (and die in it), while a sample of perfume that nobody else proclaimed to love, especially in a dab vial, seems like a good candidate to be sent unsolicited and, most likely, not to one of the friends whose tastes P. knows. It is easier to just throw it in than spend time asking if the recipient even wants to test it.

… Another perfumista, S., gets a sample from P. – and everything repeats. In the end, those “bad perfumes” and/or “bad samples” get to move from one perfumista to another much more often than “good” ones amplifying the common perception of the recent years that niche perfumery becomes worse and worse.

What do you think? Were those just feverish emanations of my perfume-deprived brain?