In replies to comments on my previous post I promised to tell this story. Disclaimer: it’s a cat story, and no perfumes were involved.

Last year we found ourselves in between couches: the old couch was re-homed while the new one was delayed. Even before that you couldn’t say we had an abundance of furniture or places to hide, especially in areas to which Rusty has access. So with the approaching 4th of July’s fireworks, which always terrify our cat, I felt a little guilty for disrupting Rusty’s environment. And to compensate that, I came up with the idea to make an artificial hiding spot for him.

I put a decorative pillow, on which Rusty used to sleep on the old couch, under one of the dining chairs and covered the chair with his blanket. I don’t remember if Rusty used it to hide from fireworks but surprisingly he took to periodically spending time inside that contrivance, so we decided to keep it even after the new couch had arrived. My vSO said that it was a “Pet Cave.”

Being extremely food-motivated, Rusty loves treats and would do a lot to get them. A cruel owner I am, I taught him to do tricks: “Sit,” “Paw. Another one,” “Down,” “Up” and sometimes even “Jump.” Also we have some variation on the “Fetch” – I call it “Catch.”

It goes like this: I would take a treat in my hand, say “Catch!”, and Rusty would start moving away while still looking at me (he reminds me a player in American football who “goes long” keeping an eye on a quarterback), then I would throw a treat, and Rusty, after “spinning” in place for a couple of milliseconds while his paws get traction with wooden floor, would sprint after the treat. It would be naïve to expect a cat to bring it back – hence “Catch.” Once he’s done eating, I call him back: “Come-come-come!” (in an unusual for me high-pitched tone) and when he comes, I give him the second treat. Unlike other tricks that I make him do for my or our guests’ amusement, this one is done to make him exercise a little for the first treat and to teach him to auto-respond to that unusual call – for those unpredictable cases when I might need to find him quickly or make him come to me.

While Rusty is busy catching and eating the first treat, from time to time I would put the third one into his pet cave. The first couple of times I did it, he found them quickly. My vSO suggested that he either saw or heard me doing it. So the next time I made sure that I stood close to the pet cave – so that I could put a treat in without moving while being sure that Rusty wasn’t looking. As you can imagine, the result was the same.

Since then every time when we give him a treat, Rusty goes and checks his pet cave, sometimes more than once (he would walk around and look in again regardless of whether he got the third treat that time or not). And since he does it even when clearly nobody was anywhere close to it, I’m positive that he doesn’t understand the physics of the process and in all likelihood does not discount the possibility of autogenesis – even though my vSO tried explaining to Rusty once (on his third attempt within a minute): “Rusty, treats are not mushrooms: they do not grow on their own!” 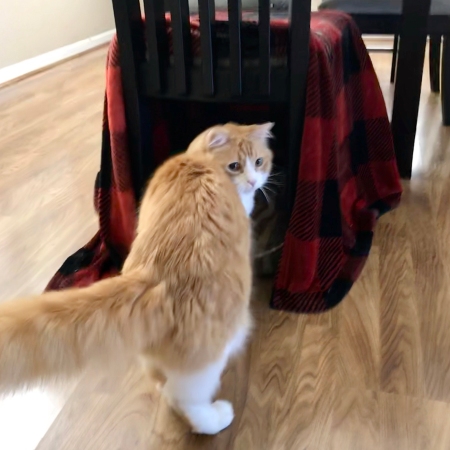 30 thoughts on “Orange Cats in My Life – Part VI: Where Do Treats Come From?”