As I’ve joked in conclusion of my recent post on sampling, it looks like these days I buy even samples only after sniffing them.

My first visit to Tigerlily Perfumery in San Francisco several years ago wasn’t a success, so for a long time I didn’t want to go there even though they were holding some interesting events and carrying perfume lines that aren’t available around here anywhere else. But as time passed, the negative impression had faded away, and I decided to give it another try.

This time my visit went really well, I spent probably 30 minutes sniffing everything I wanted to try. There were a couple of things that I especially liked about the store. First, in addition to “hard to find” niche brands, such as Neela Vermeire Creations, Papillon Artisan Perfumes or Tauer Perfumes, they carry local (SF Bay Area and Californian) brands – Ineke, Parfums DelRae, Bruno Fazzolari, Yosh and others. Then, people who work there are not push-y and allow customers to browse/sniff all they want without insisting on helping them but being close in case help is needed.

Finally, as I found out, Tigerlily offers at the store three free 1 ml dab samples of your choice. After that you can buy other samples at $3 per sample. I really like this approach: selling samples isn’t their business; they cover costs while providing customers a chance to try perfumes at home and, hopefully, come back for more.

After smelling about 40 perfumes from the nozzle first and then some of them on blotters, I ended up buying 3 samples in addition to 3 free ones to try them on skin at home. Even with the cost of parking in the area, price per sample turned out to be much better than it would have been had I bought them online – especially since I knew already that I didn’t dislike those perfumes. Today I’ll talk about three of the six.

I’ve previously smelled Tauerville Vanilla Flash but since I’m not a vanilla fan in general, I haven’t tried it on skin. This time I smelled it on paper again and decided that I had to properly test it.

I have a feeling that I’m the last one to try it and everybody else has done it by now. So I would be very curious to hear whether you’ve tried Vanilla Flash.

I like that it is not too sweet. I enjoy booziness of vanilla. But it feels a little too intense (like most of Tauer’s perfumes), I think I would have preferred it in the form of body oil, so probably I won’t go for a bottle – even though the price is more than reasonable. But if anyone has 5 ml decant to swap with me, I would love to wear it a couple of times.

I wasn’t completely new to Nishane Ambra Calabria as well: Lucas who did a very nice review for this perfume last year graciously sent me his sample. I tried and liked it but then something else distracted me and I forgot about it.

When I smelled it again at Twisted Lily, I decided that I wanted to give it another try. It is such unusual perfume! I don’t think I’ve smelled before such combination: very strong citrus developing into warm amber. I think it’s the most summery amber I’ve ever come across. And since I like ambers and do not have enough weather suitable for heavy heaters in my collection, I could see myself wearing Ambra Calabria. But why 50 ml?! Especially since they position it as extrait. I would love to be able to buy 10-15 ml bottle from the brand but not 50 ml.

BLOCKI in every season

BLOCKI brand actually was the main reason I decided to go to Tiger Lily: a week earlier they had there a presentation of their new perfume – SANROVIA, which I was curious to try since I really liked and recently bought this grand affair (pictures below are those that I couldn’t include in that post 4 months ago since it had arrived only after I published it). I couldn’t make it to the event but decided to go the next week.

Unfortunately, SANROVIA didn’t pass even paper test. I might go back and try it again one day but this time I decided to skip it. Instead, I got their earlier released perfume – in every season.

I tried to like it. I gave it all possible benefits of the doubt. I don’t know what to say: it is not nasty or unpleasant, but it is neither interesting nor even pleasant nor beautiful. It gets a little better a couple of hour into wearing but frankly speaking I would go for many of the mass-market perfumes before I would think of wearing in every season. In any season. 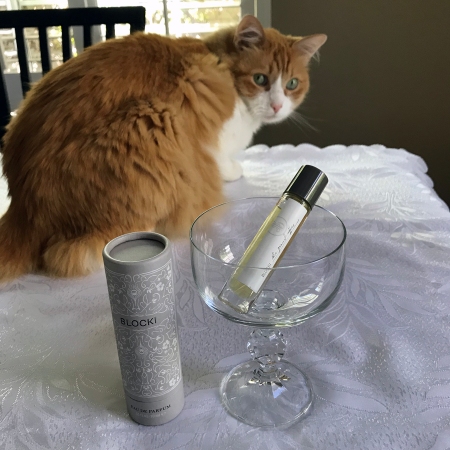