How many different citruses can you think of?

As I told before, in my childhood there were just four different citrus fruit – orange, mandarin, lemon and later grapefruit. Since it was pre-Internet, I didn’t even know about other varieties.

Of course, by now I’ve widened my fruit horizons, so as a mental exercise, without looking it up online, I came up with additional seven: pomelo, clementine, tangerine, lime and Meyer lemon – from my grocery shopping trips; and from my perfume hobby, I know about bitter orange and bergamot though I’ve never seen or eaten them. So, eleven in total. 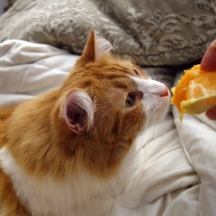 While everybody in our household loves citrus fruits, citrus fragrances is probably one of the least represented categories in my perfume wardrobe. It’s not that I do not like how many of them smell, but somehow I always think about cologne-type creations as of “lesser” perfumes than their oriental, woody or even floral relatives. For a while I’ve been contemplating buying one of Atelier Cologne’s citrus perfumes but kept postponing until I finish the travel spray of Orange Sanguine and a decant of Cedrat Enivrant.

And then Atelier Cologne came up with the fifth cologne in their Joie de Vivre series – and I surrendered. Brand’s site gives the following notes for this perfume: clementine from California, mandarin from Italy, juniper berries from Macedonia, star anise from China, Sichuan pepper from China, basil from Egypt, vetiver from Haiti, sandalwood from New Caledonia and cypress from France. Clementine is not my favorite fruit; and I’m not sure that I would recognize its smell or even taste from, let’s say, tangerines. But Clémentine California smells great whatever citrus it’s supposed to invoke, and it is extremely juicy, bright and uplifting. It probably can be classified as unisex but, in my opinion, it’s a little sweeter than a “civilian” man would choose to wear. I cannot say that I like Clémentine California the most out of the 5 citruses in the line – I like Orange Sanguine and Pomélo Paradis probably not less. But Clémentine California bought me with the name; and I bought a bottle.

As the name pushed me towards this perfume, I kept thinking about it and even got annoyed: if it’s Clémentine than why not Californie; and if it’s California, why not Clementine? And, in general, why clementine and California – whatever language you choose? I do not have a definitive answer: if they’ve explained it in some interviews or in an ad copy, I haven’t found that. But I have a plausible theory based on what I read in Wikipedia. The fruit was first discovered in 1902 by Brother Clément Rodier, so it was named after him – first in French and then in English. The first commercial production of the fruit started in California in 1914. So that English-French centaur makes some linguistic sense.

By the way, do you know that there are only four original citrus species, from which the rest of cultivated citrus hybridized? No, those four aren’t the same four that I knew growing up. According to Wikipedia, the four core ancestral citrus taxa are citron, pomelo, mandarin and papeda.

38 thoughts on “When Life Gives You Clementines, Enjoy Them”