I saw my first live orchid when I was about twenty years old. I knew about their existence, read about them in books and maybe even saw them once or twice on TV (not sure about that part though) but they just weren’t present where I grew up.

As I tried to remember from where I knew about orchids, Nero Wolfe mysteries by Rex Stout were the first suspects that came to mind. Those who read the novels know the important part that the orchid greenhouse plays in the stories: the fact that the famous detective was spending in there four hours daily making clients, police and everybody else adjust their schedules around that activity is one of the common elements of most books in the series. I liked these mysteries and read many of them. So it was hard not to get intrigued by the orchids.

But no, these books came into my life later and they weren’t my first encounter with the fascinating flowers. I think the first impression – or rather imprint on my psyche – had been left by the film based on Arthur Conan Doyle‘s novel The Hound of the Baskervilles. Do you remember the scene when Miss Stapleton meets Dr. Watson for the first time and, thinking he was Sir Henry Baskerville, tries to warn him?

“Man, man!” she cried. “Can you not tell when a warning is for your own good? Go back to London! Start tonight! Get away from this place at all costs! Hush, my brother is coming! Not a word of what I have said. Would you mind getting that orchid for me among the mare’s-tails yonder? We are very rich in orchids on the moor, though, of course, you are rather late to see the beauties of the place.“

That is the only scene where orchids are mentioned in the book and it’s not too captivating. So why did it have such an effect on me? As I mentioned, it was a film not a book and orchids played a much more prominent role there.

Unlike that character in the book, Sir Henry in this film version was depicted as a slightly goofy and peculiar man. I would go so far as defining him as a comic relief. There is a scene in the movie – a totally original one, there’s nothing even remotely close to it in the book: Sir Henry and Dr. Watson, while waiting in Sir Henry’s room to discover the reason for the secret night journeys of the butler, Mr. Barrymore, to the window, got drunk and Sir Henry, for a minute and a half of the screen time, kept asking Dr. Watson what exactly Miss Stapleton, with whom he was falling in love, told Dr. Watson about orchids and Dr. Watson kept answering: “She said: it is too early to see the beauties of the place since orchids haven’t started blooming yet.” And they went on and on about it (see the video clip below; it doesn’t have subtitles but body language and manner of speech is clear enough to understand what is going on).

That last part about orchids became a popular expression. I’m not sure if others caught the season swap – I didn’t. It wasn’t until I looked up the original quote for this post that I realized that there was a switch.

I don’t know with any degree of certainty why the script writer or the director decided to do that: I doubt it was done for the phrase. But knowing where the movie was filmed, my guess is that they’d decided it would be easier to depict Devon’s nature in early spring without any greenery. And did I mention we had no orchids whatsoever?

I like orchids. Not only they are utterly beautiful but they are also very enduring: they bloom for months. But orchids do not like me: the longest I managed to keep one of them alive was about two years and it never bloomed again. Usually, though, it ends up like this (giraffe finger puppet optional): 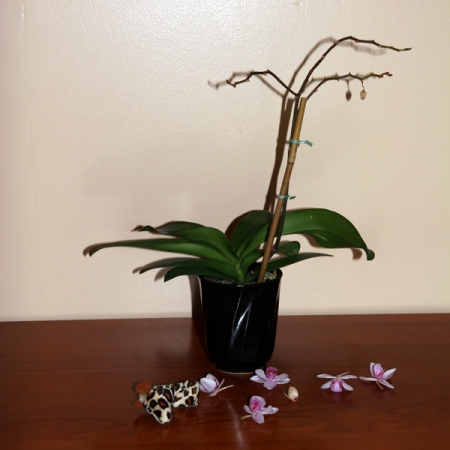 So while I still get real orchids in my house from time to time, I decided to focus my attention on more … durable objects. Who would have thought I could find a context to classify perfume as durable? But compared to orchids…

Black Orchid by Tom Ford does not require an introduction: by now everybody has tried it and made up their minds (but for those who landed on this post right after returning from a desert island, Kafka’s review provides all the information for this perfume you might crave). I just want to touch on a couple of aspects.

First, Black Orchid is one of a few perfumes that live up to the qualifier: it smells deep and dark. It’s not a day-wear perfume and it even smells differently in the evening (OK, I know that this part is subjective but I had to share how I feel).

Second, I fail to smell chocolate in Black Orchid. Usually I’m not surprised when I cannot get some notes since my nose isn’t too good with discerning them. But chocolate?! Do you know how many kilograms of dark chocolate I’ve consumed?!!

Speaking of chocolate, are you aware that there is an orchid variety that smells like chocolate? I encountered it on my Hawaiian trip – in a greenhouse though, not in nature (see the picture below). Black Orchid doesn’t smell like it either. 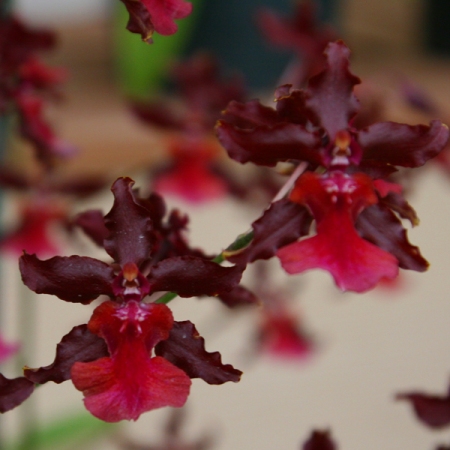 Back to durability… I’ve recently discovered that my mini bottle of Black Orchid has gone bad. I got it in a swap so I’m not sure how old it is but it reinforces my bias against dab mini bottles. If I go through the remaining spray sample I might consider a small bottle since I like both the scent and the bottle. And I like the idea of a black orchid.