Going through life we keep bits and pieces from the past – memories, mementoes and keepsakes. When I feel happy or if I’m sad I would go through that eclectic collection to smile, relive some moments or just to assess my possessions. Interestingly, I often find perfumes among those tokens of the past but, of course, people I love hold the primary spots…

The first memory ever from my childhood that I think I have: I’m standing in my crib, I see my mother washing something in the bathroom under the running water. I want to call her but I can’t: I’m not talking yet.

I was told that I started talking when I was ten months old but in that memory I felt frustrated by not being able to attract my mother’s attention. I really needed her! Can it be an actual memory from when I was 10 m.o.? Or was it a dream that I had later? I can’t be sure but it’s a fact that before I was two we moved from the apartment where I could see a bathroom from my room and I’ve never been back to it.

The first fashion item I remember was a shorts and top set – a gift from a distant relative from the U.S. – that miraculously made its way to me through the iron curtain. I was about five. It was so different from everything I had to wear then and I loved it and wore it whenever allowed.

That summer my parents took me to a seaside vacation. I don’t have a continuous picture of the events and don’t even know how long we stayed there but I have random glimpses from that trip (and a photo above to demonstrate the top from the set that traveled to me halfway around the World).

… We rented a room at the apartment (with owners living in the next room). It was on the second floor and one night somebody used a ladder and tried to steal my parents’ jeans (a valuable and almost unobtainable commodity at the time). I don’t remember if they succeeded but it caused an animated discussion the next morning between all inhabitants of the apartment.

… One day when my father, who could tolerate sun a little bit better than both my mom and I, decided to stay on the beach longer, and two of us were walking back to the apartment, some guy paid my mother a compliment saying that she looked like my older sister. We both were pleased.

… On our landlady’s bookshelf there was a perfume that completely seized my attention. First of all, the name was Zolushka (which means Cinderella). In addition to that, the box had a double wall and if you were to carefully push Cinderella away from the mirror you could see her dress. I can’t tell if I smelled the perfume but I immediately fell in love with its box.

I used all the charm I had to convey to the landlady how much I liked the box and would love to own it. No luck: I got a typical answer of an adult who counts on a short attention span of a child: “Maybe the next time when you come to visit and I’m done with the perfume…” I bet she couldn’t even imagine how good my memory was…

For many years after that, whenever I was at a store that had a beauty department, I would be looking for Zolushka. I’m not sure I would be able to persuade my parents to buy it for me but I didn’t think that far – I wanted to find it.

I’ve never seen that perfume or that box again – until I started looking online for pictures of it now, many decades later. Now I wonder: was there actually a dress inside that looking-glass? Maybe I forgot and it’s a mermaid tail? 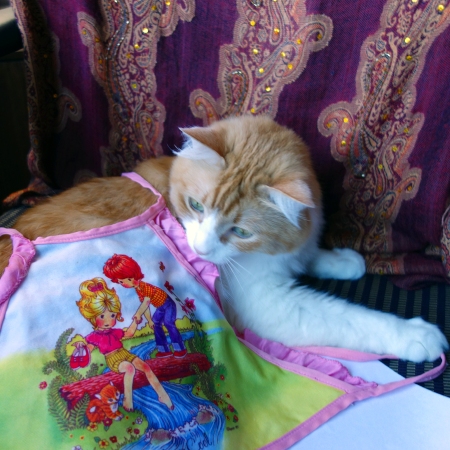 This top came back to the U.S. with me. It’s the oldest material possession I have. At some point it was touched by every woman in my family so it’s very dear to me. And look at that orange cat! (I’m not talking about Rusty).

As children we have a luxury of a hope that if you want something badly your wish might come true. As adults we know that sometimes no matter how much you want something to happen it’s not possible. Sometimes it really hurts. But, as an advantage of the age, we get to cherish memories, dreams and reflections of the past. If we are lucky, both those remembrances and our memory are good.

Images: Zolushka perfume found somewhere; my mom and I – an unknown street photographer, Rusty and my top – my own.