In the post for my Birthday Girls Just Want to Have Fun I’ve mentioned that I treated myself to the bottle of a perfume from Guerlain (I wonder if it’ll become a yearly tradition) and asked you to try guessing which one.

When last year I read about that new collection being released, not being a real Guerlain fan girl (yet?), I wasn’t too excited: one more limited distribution offering that I didn’t want to chase.

Then I read a review of all three perfumes at Olfactoria’s Travels and though it was very nice and … polite – the way most Birgit’s reviews are – it didn’t conjure any lemmings: most likely because B. didn’t love any of them and, once again, because of the limited availability.

And then I decided to break my last year’s NY resolution of not buying samples until I test most of those that I’d previously accumulated and bought 2.5 ml samples of all three perfumes in the collection.

Encens Mythique d’Orient was love at the first sniff. I haven’t read a single raving review for it (there were many positive though – not sure if reviewers really liked it or were just loyal to a favorite brand). My friend at work really disliked it; her comment was:  “It smells like a men’s perfume counter at Macy’s” (so no wearing of it to the office). I tried to negotiate with myself getting a decant first… But a decant bottle wouldn’t be a nice birthday present, would it? 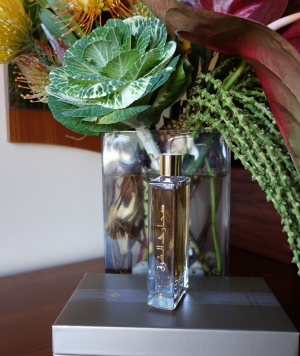 I’ll make another 2 ml spray sample to give away to one of my readers anywhere in the world (though nobody knows what might happen to it with the international shipping) – to try if you haven’t tried it yet/want to re-try or to use if you liked it but not enough to go for a bottle – just tell me what you think. I’ll use some type of random selection after closing the draw on Wednesday, February 20, 2013, at 11:59 p.m. PST.

If you don’t want to be in the draw, tell me anyway if you liked Encens Mythique d’Orient, disliked it or felt indifferent – I’m curious.

And do not think I disregard your opinion! Even though a year ago for my birthday I chose not the mostly recommended perfume, I rectified it later in the year when I bought Chamade that seven people had suggested as a perfume to remember my New York trip by. Six readers named Vol de Nuit this time. It’s just an observation…