The exhibition covered three distinct periods. The first period – time before 21 years old Lee Miller, an established model and an apprentice photographer, met and became a student and a lover of Man Ray, a well-known at the time avant-garde photographer and painter, seventeen years her senior. The second period – their three years together in photographs, paintings and “rayographs.” And the last one – their works after she left him and they went on with their lives.

While it wasn’t the most interesting exposition, I was very pleased to find several works for which Lee Miller took pictures of Guerlain’s shop front. Two better known – photographs Exploding Hand and Self-portrait, Reflection in the window of Guerlain (see below) and several more from the same roll that I wasn’t able to find online (with an actual Guerlain store front). 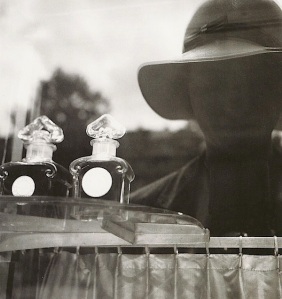 Disclaimer: I’m not even an amateur in art appreciation; I’m nobody, so the following part is just my layman’s opinion.

I thought Lee Miller’s photographs were very good especially those that she made as a war photographer. I liked some of Ray’s photographs (though that exhibition doesn’t do him justice) and was appalled by most of the “paintings” presented: it’s not art! Those are not good even as decorative pieces. The only excuse for showing them is that whoever curated the exhibition just couldn’t get enough good items and had to use fillers. To the same purpose, I think, there were some works of other contemporary artists from their circle. Picasso’s portrait of Lee Miller attracted my attention and prompted a comment addressed to my vSO: “This is art. He knew how to paint and then chose to do it this way. Ray Miller’s works look like he just couldn’t do it any better.” (I am like that every time I come across something that I refuse to consider art – no matter on whose authority a piece in question got in which museum/exhibition. For some reason I feel very passionate about such issues)

I tried to find those pictures as postcards in the museum shop. For some reason I wanted to buy those prints with Guerlain sign. My efforts were futile. But as I was fumbling through postcards I smelled a perfume on another customer and liked it. I complimented her on it and asked what it was. “Paloma Picasso” was her answer.

I saw Paloma Picasso thousand times. It was ubiquitous in every online and many B&M discounter stores. I could describe the bottle design if you were to ask me a month or ten years ago. Yet that moment at the museum shop I realized that I’d never even smelled it. Don’t ask me why. Ok, ask me.

Looking back I recollect that, based on the packaging (I know, I know – very deep of me), I thought it was a heavy oriental perfume, something like YSL Opium, so I didn’t think I would like it – and never tried it.

That weekend while writing one of the LLL posts I almost added the Looking For section to ask if anybody could spare a sample of Paloma Picasso – that was how much I liked it on the women in the museum. But suddenly I remembered that in one of the duty-free miniature sets that I got as a gift there was a mini of Paloma Picasso EdP.

Do you remember a “deer scene” from My Cousin Vinny?

Mona Lisa Vito: Whoa. You’re gonna shoot a deer?
Vinny Gambini: I don’t know. I suppose. I mean, I’m a man’s man, I could go deer hunting.
Mona Lisa Vito: A sweet, innocent, harmless, leaf-eating, doe-eyed little deer.
Vinny Gambini: Hey Lisa, I’m not gonna go out there just to wimp out, you know. I mean, the guy will lose respect for me, would you rather have that?
[Lisa gets up, walks over to the bathroom and shuts the door]
Vinny Gambini: What about these pants I got on, you think they’re O.K.?
Mona Lisa Vito: [comes out of the bathroom] Imagine you’re a deer. You’re prancing along, you get thirsty, you spot a little brook, you put your little deer lips down to the cool clear water… BAM! A f** bullet rips off part of your head! Your brains are laying on the ground in little bloody pieces! Now I ask ya. Would you give a f**k what kind of pants the son of a bitch who shot you was wearing?

That “BAM!” (you have to watch that short clip from the link above if you do not have a visual image of Marisa Tomei’s gesture in your head) was how I felt the first time I applied Paloma EdP. It is a very strong and very loud perfume. I love what I smell but I’m not sure I can actually wear it: I feel almost overwhelmed just testing Paloma from a dab mini on my wrist. But I’m so impressed by it and so surprised that I avoided it for so long that I plan to try to wear it (meaning – I’ll carefully apply it in 2-3 spots while having a shower within my reach). 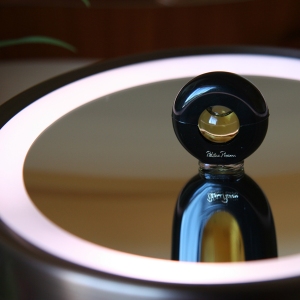 For real reviews go to Bois de Jasmine, The Non-Blonde or Perfume Shrine.

23 thoughts on “Surrealism and my Surreal Perfume Perception”