Hey crew, Back in 1985/6 I studied Fashion. Not the big, flash Fashion Design course at East Sydney TAFE or an Arts Fashion Degree. Nope. I went to a North Shore TAFE (Technical and Further Education) in Hornsby to do a Fashion Technology\y Certificate. We were taught the production of fashion with a very small design element. So the aim was to create someone with the ability to take a garment from drawing to product. Someone with the knowledge of procedure, pattern making, grading, fabric, fastenings, creation, sewing and the ability to interpret pictures. The fashion designers are notoriously inept at this. They have visions, we make them reality. We were perfectly trained to go into business, become a 2IC, sample machinist, pattern maker/grader, cutter or any number of jobs in the industry “FASHION” or even costume creation in the arts. At the time, with an extra short course a few of our crew went on to become important in the new computer world of laser cutting and design, just becoming reality. I was lucky enough to work as a Costume Designer for Children’s Theatre, Pattern Maker/Grader/Cutter for a menswear company and then a Machinist for a small, high end fashion and bridal store in Sydney’s uber trendy Paddington for a while. It was at this point that I realised I was generally too lazy and imperfect to ever want to make my own fashion house a reality and that working for other people was never going to make me happy or rich. Bye fashion. Hello DRAG! Still never made me as rich as I’d dreamed but the fun it has brought, the chances, friends, opportunities, unbelievable life has more than made up for it. It also presented an opportunity to make fabulous clothes without the need for perfectly straight hemstitching, the hand sewn finest zippers or any restrictions on reality. So that was an incredibly long preamble into Vivienne Westwood and Boudoir.

Yes, Vivienne Westwood died last week, most of you will already know. In the mid 1980s she was any fashion student’s obsession. We were taught that Vivienne Westwood always did it first, but she always did it worst. Her ideas would make big splashy headlines for their brilliant reconstruction of shape, size, fit, pattern and wit. Then that idea would filter to the luxurious fashion houses and be done perfectly. The 1970s Punk, chains, safety pins, hobble skirts, slashed and sloganed T Shirts. 1980s New Romantic, super platform, mini crini, tartan, and who can forget her Buffalo Girls look and McLaren’s song? By the time I got to London in 1994/5 Westwood was old guard fashion and the still functioning World’s End store on Kings Road had basically become a merch store with some fashion. 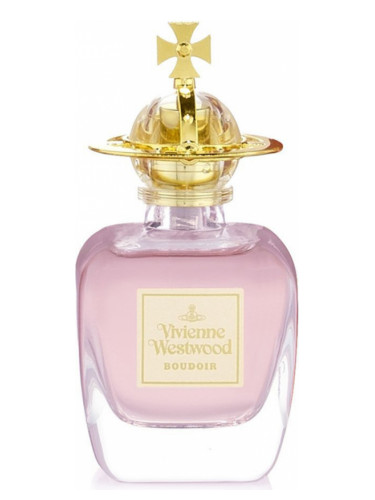 This then brings us to 1998. The name Vivienne Westwood had been in newspapers and on TV for 28 years. It was part of our psyche and much of the outrageous and rebellious past had been wallpapered over with glamour. The remnants of naughtiness even gave it a cachet for the cashed up rebels without a cause and trustafarians. What better way to celebrate her elevation into mainstream that create a perfume? One that has most of the hallmarks of a modern aldehydic floral and some funk underneath. Boudoir was not outrageous or even over the top, A gentle, sweet, hark back to the perfumery of bygone eras but cleaned up for modern sensibilities and much more importantly; SALEABLE! Boudoir became de rigueur among the fashionista party set for a while. It was so popular that many Mugler Angel aficionados made the change, or added this to their spritz list.

I only have the extrait and it still smells unbelievably good.

My bottle is old. Over time Boudoir has stopped being notes to my nose. It is itself and no other. A sparkling, soapy, white/yellow floral with some sweaty greenery underpinned by a warm, rich breathy base, lightly spiced all the way through. Just a swipe with the glass stopper and the room fills with Boudoir in seconds. Happy memories. Longevity is right up there with Vivienne Westwood herself. Unless I swim or bathe this single swipe will continue through till tomorrow morning.

In honour of someone who has been instrumental in my life through music, design, fashion, and myriad other ways. Goodbye Vivienne Westwood and thank you.