Recently Steve (The Scented Hound) wrote: But in looking at my perfumes, I noted that there were a few this winter that I barely touched but once or twice.  But last year, I wore these same fragrances multiple times per week (Serge Luten’s Ambre Sultan for instance).  I started wondering if my tastes were changing or if my interest in perfume was dominated by the thrill of the chase in purchasing new perfume rather than for the pure love of the fragrance.

I read it just as I was thinking about my perfume usage and what to do for this month’s statistics post. I almost never wear the same perfume not only two days in a row but even more than once during the month. So to track my habits and to see if I favor the same perfumes year over year I decided to look at a three months period – January-March 2012 vs. the same period of 2013. 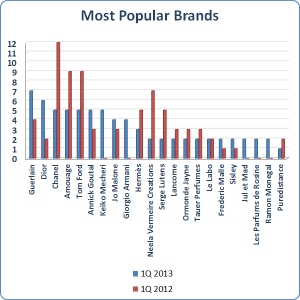 In more than 40% of cases I wore the same perfumes in the first quarter of both years. But my wearing pattern changed: this year I used perfumes from more brands so I was less loyal to any of them.

* Perfume house I wore most often: Chanel/Guerlain – just to think that I bought my first Guerlain perfume inFebruary 2012!

Do you usually wear the same perfume for several days or do you change it every day?

1 When I wear a perfume I apply it to at least three-four points and usually I plan to spend at least 4-8 hours with the same scent so I’m prepared to re-apply if the original application wears off.