Tara, previously of Olfactoria’s Travels, while being on the move to her own new virtual home, decided to visit a couple of friends’ blogs. I have the honor of hosting her first. Here’s one of her great reports on the PLL’s event.

I was particularly looking forward to this evening at Perfume Lovers London because firstly, it was being led by my mate Sabine of Iridescents and secondly, we were going to have fun drawing our scent impressions.

Instead of the usual rows of chairs, we were seated at tables laid out with paper and various art materials. Sabine had also provided some inspiration with print outs of various images and colour palettes.

As you can imagine, there was less talking and more colouring going on than at a normal PLL event, but here’s an idea of what was said and some of the wonderful images from Sabine’s blog. 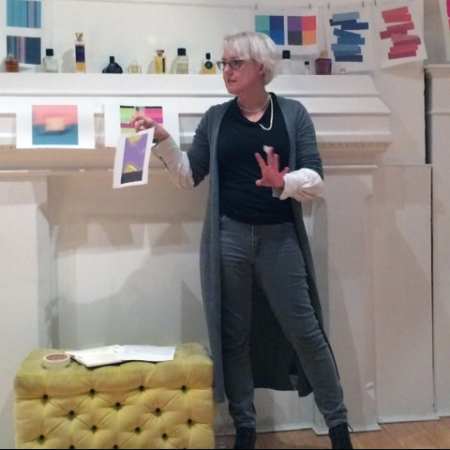 Sabine: I went ten years without wearing perfume, then when I went back to it – wow – there had been an explosion in niche perfumery. I needed a way to organise and make sense of it.

I am a graphic designer so I tried to translate perfume into colour. There are quite a lot of similarities between the two. Both are very subjective; my rose is not your rose and my red is not your red. We can describe both as being opaque, bright, transparent and so on.

This is why I started my blog, Iridescents, where I reproduce the images digitally. We can’t do that tonight but we do have paints, pencils and pastels so we can play around with how scents relate to colour.

Lila: This is the first of the Aedes de Venustas fragrances and the perfumer is Bertrand Duchaufour.

Sabine: Try to think of a palette of 2 or 3 colours. What colours does it make you think of?

Audience members: “Pink”, “Green”, “The colours of a stick of rhubarb”.

Sabine: The pinks and greens come and go in my composition and the notes in the perfume do the same. I think of it as very jazzy. There is not a structured top, middle and base.

Sabine: If a perfume makes you think of yellow say, try and think which yellow.

The next one is not a perfume but a perfume ingredient. It’s vetiver oil. What colour does it make you think of?

Sabine: This is a completely synthetic perfume, mostly made up of Iso E Super. So what colours do you use when you have a material not found in nature? Try and think of how much of one colour and how much of another. Think about the proportions.

Liquid Night, A Lab on Fire

Sabine: Liquid Night is neither hot nor cold. It has hard shapes but it also has a softness to it. It’s very urban. It makes me think of driving in the rain and the reflection of the raindrops on the windscreen.

Sabine: Felanilla is cosy and a little powdery from the iris. It’s also animalic but not too much.

Sabine: Yes, for example people in warmer countries tend to wear warmer colours because their surroundings are brighter. People have different associations with colours, as they do with scents. People in cities tend to wear more muted and subdued colours. 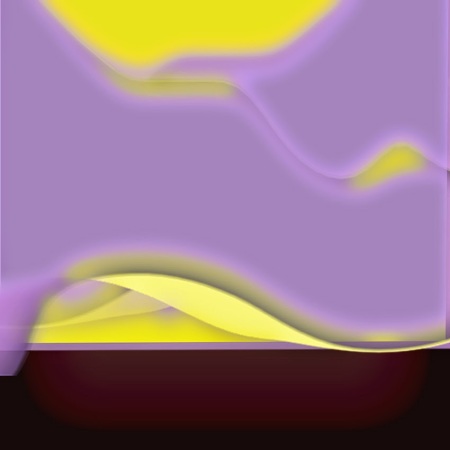 Sabine: If you think of Sel Marin as a scent representing the sea, which would it be in terms of colour – the Atlantic or the Med?

[Most people said the Atlantic.]

Audience member: Would you wear it?

Sabine: My husband is wearing it, and therefore it is a perfume I associate with him.

Lila: The Oddfellows is a club that anyone can join. It’s pretty great. They have premises all over the country. It’s not a gentlemen’s club but it might have been at some point in the past.

Sabine: The Odd Fellow’s Bouquet is one of those fragrances that doesn’t change much.

Lila: It’s a bit masculine for me.

We know perfumes can change as they develop and I try to put that into my images. Jicky definitely develops over time so you might want to leave room in your picture for how it smells in 10-20 minutes time.

Lila: This is the latest release from L’Artisan.

Sabine: I looked on the Basenotes database and the number of perfumes with black in the name hugely outweighs white. I haven’t done an image for Noir Exquis but I would use just a little black. I’d mostly use toffee, caramel and beige.

Lila: You won’t be able to smell anything else after this!

Sabine: I used a lot of red in my image. Not a rose red but a fleshy red. It was blurred on Facebook for a while because it was thought to look like female genitalia.

Lila: We’ll put all the Salome pictures together and share with Liz Moores of Papillon as she’s a friend and supporter of PLL.

It was a great evening and we were all engrossed in creating our own visual interpretations of the fragrances. It was interesting to see how different our impressions were. Most people saw vetiver as green or brown while I saw it as grey. Sabine’s husband and I saw Sel Marin as the Atlantic sea under a slate sky, while two other people on our table saw it as a blue sea and bright yellow sun.

When you’re trying to visualise the scent as colour it really makes you think and analyse the aroma in a different way. I found this fascinating and it has definitely added to the way I interact with fragrances.

Many thanks to Lila and Sabine for such a novel, interactive evening and to Roulier White for supplying a couple of the bottles.

Please answer the question for Undina’s Entertaining Statistics post: What perfume do you most associate with a colour/colours, which one(s) and why?

Images by Tara and Sabina

New Saturday Question post on my blog: Are You Tempted by GWPs?