Do you still remember those times when you could go to a department store, pick up a tester from a counter and spray it on a paper strip or on your skin? …

It was just a joke; I’m not practicing my March 2021 “A year in ‘shelter-in-place’” post. But when I started writing this post, I realized that I wasn’t sure what tense to use. Let’s pretend that life is (or very soon will be) what it used to.

In early days of getting acquainted with niche perfume world, as many of you probably did as well, on a single perfume shop trip I would use 4-5 spots on each arm to try multiple different perfumes after a quick sniff from a bottle or a test strip. But in the last 3-4 years I rarely test more than 2 perfumes at a time, and most days when I find myself at a store where I could try something, I am on my way to somewhere (a party, some theater or other performance or business trip) where I don’t want to reek of a cacophony of random perfumes.

So, what I normally do these days is: after sniffing from a nozzle (yeah, I know, extremely scientific approach), I identify perfumes that I want to try, spray those on paper, walk around, discard those that do not smell promising, try to get samples for a couple of those that I liked the most to test on skin at home and take away with me 5-6 paper strips with scents that I liked the most and want to check how they develop. If one day you happen to be around one of the “perfume centers” of San Francisco/Bay Area and see a woman walking the mall or adjacent streets with a fan of paper blotters in her hand who can care less how it must look like – there is a high chance it would be me. And then, when I get to my car, I use a vent grid to hold those strips separated until I get home. 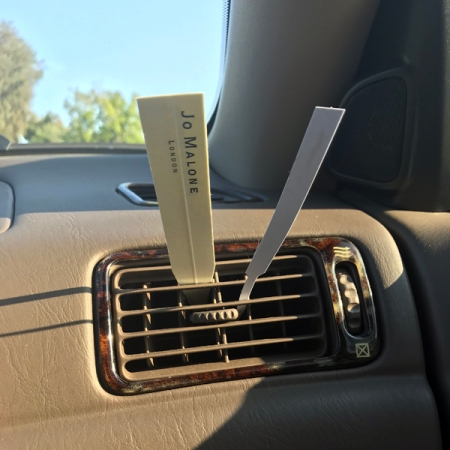 That was exactly how it went last year when, on the spur of the moment, I went to Tigerlily Perfumery to try perfumes that are hard to get to test for free anywhere else around here. I went through, in my estimate, 40-50 bottles, bought several small samples (I love that they do that! I’d rather officially pay a small amount to take what I want to test at home than do all the dancing for maybe getting what I want) and left with 5 or 6 strips, mostly (but not all) of perfumes samples of which I bought.

At home I re-smelled the blotters and left them on the bathroom counter to re-visit the next day to see what remained from the scents. Samples went into the “to test” box but I wasn’t in a hurry to reach for them: I already smelled all of them in the store, I had them – so what is a month or two before I put them on skin?

But my car smelled wonderfully the next day. And the day after that. And probably for the next couple of weeks from time to time I kept catching a pleasant waft… It took me a while to realize that one of the paper strips fell into the vent and kept emitting an unknown aroma from the depth of my car. But which one was that? I hoped it was one of those that I bought a sample of, but I wasn’t sure. I went on testing, two at a time, waiting for that magnificent drydown.

I got lucky: it was one of the samples that I had. Naomi Goodsir Or du Serail, created in 2014 by Bertrand Duchaufour (BTW, have you noticed that he almost disappeared from the perfume scene last year? According to Fragrantica, there were just 7 perfumes he released for 4 brands – and I’ve never heard of 4 of them. In 2014 there were 15 and in later years there were even more). With Or du Serail it was one of those times when you know that you want that perfume. So, I bought it. 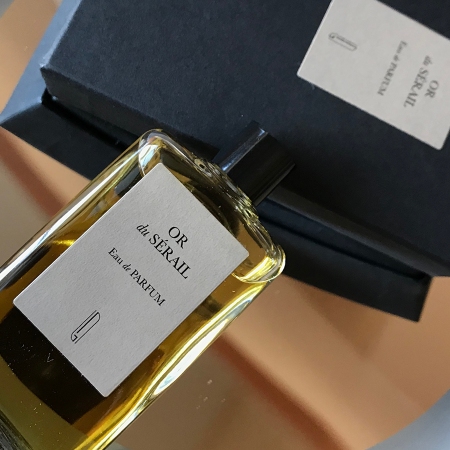 Or du Serail is rich and very warm perfume. It’s not timid – it’s loud and strong and present. And I love wearing it. If you want a fuller review, read Kevin’s (Now Smell This) impression. But if you haven’t tried it yet, I think it’s one of those perfumes that is worth trying whether you end up liking it or not.

21 thoughts on “Better than a New-Car Scent”

New self-care post on my blog about my favorite (and not) lip care products.