I planned to do this mini-project for the first week of July, a month a name of which, as we discovered, in several Slavic languages is connected to linden. But first it was my mini-vacation, then I was too busy, then something else came up. But I still did it!

I love linden, and I wouldn’t mind wearing perfumes with this prominent note for 7 days in a row or even longer but I didn’t have enough to cover the whole week. 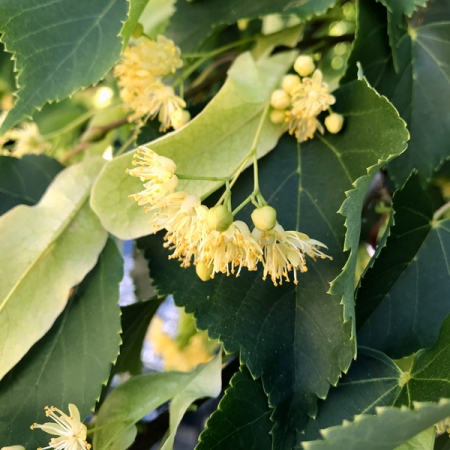 From my two previous Single Note Exploration posts (Take 1 and Take 2) I found only three perfumes that I like, own and wear: my two absolute favorites Jo Malone French Lime Blossom and April Aromatics Under den Linden. I also wore Tauer Perfumes Zeta, which still didn’t smell like linden to my nose but since otherwise it’s a pleasant green perfume, I will finish the bottle eventually.

In addition to these three that I wore, I tested two more linden-centric perfumes.

One of the readers shared with me a sample of Frau Tonis Parfum No. 10 Linde Berlin. Until she mentioned it, I haven’t even heard of the brand. Notes for this perfume are not too complex: green notes, honey and linden. A couple of times when I tested it, it smelled a little too sweet while on other occasions I thought it was rather bitter and acidic, which I liked more. It is not my favorite linden perfume but had I traveled to Berlin, I would have picked up at least a travel bottle of it. Maybe one day I will.

Schone Linden 05 by Krigler (seriously, what is it with all these brands and numbers?!) got to me by pure chance: a friend who was shopping at the boutique managed to get this free (!) sample for me.

Do you know of this brand? I wouldn’t have if it weren’t for that friend who introduced me to the best lavender perfume I found so far – Lieber Gustav 14.

Schone Linden is a beautiful-beautiful perfume. Despite the name though, it is not a linden perfume. Rather it smells of the whole bouquet: camellia, carnation, gardenia, lilac, linden, tuberose and violet (additional two notes mentioned vanilla and musk). I would love to give it some more skin time but unfortunately my small sample is empty.

Despite my love to Lieber Gustav and some infatuation with Schone Linden, the brand irritates me: they keep spinning that BS about perfumes for royals and stars but for me it feels like they could take some lessons in sticking their pinky out (I won’t name names). Nowadays, at $365 for 100 ml and availability for online purchase, their perfumes are hardly that exclusive or special but they carry themselves as if they were. Their samples are $20-$31 for a single 2ml plastic vial (or $105-$165 for 5 x 2 ml). Not even redeemable against a full bottle purchase.

Krigler currently has 4 stores Worldwide with 2 more opening this Fall. One of them – in San Francisco, where I plan to visit it to try Schone Linden sprayed lavishly (I guess, should go for at least $5-worth spraying spree).

In my search, I discovered one more beautiful linden perfume, thanks to Asali (The Sounds of Scent). First she sent me a “blind sample” for testing. It smelled pleasant, I liked it. But what I liked about it probably even more was that not only I recognized several notes that actually were present in it – linden and mimosa, but I guessed the brand (it reminded me of Tiare Mimosa, which I didn’t know well but smelled earlier), which is not something ordinary for me and excites me every time it happens.

As it was revealed, the sample was of Guerlain Aroma Allegoria Aromaparfum Apaisant launched in 2002 but sadly discontinued long before I got to try it. Asali was very kind and shared with me a decant from her bottle. I used it up and liked so much that I kept rummaging through eBay listings until several years later I found a partial bottle. 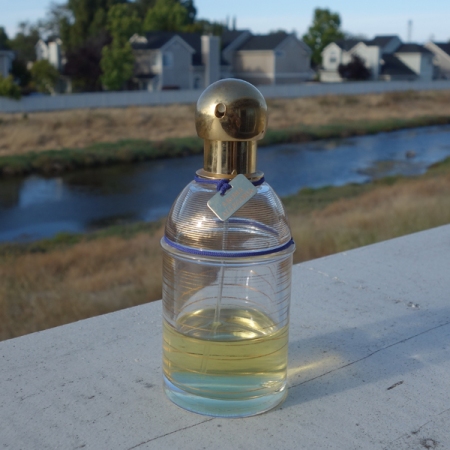 Aroma Allegoria Aromaparfum Apaisant’s notes: freesia, wormwood, linden, mimosa, chamomile ylang-ylang and vanilla. If you look at this perfume’s entry on Fragrantica you’ll notice how “yellow” the scent description in notes pictures looks – and this is exactly how it smells! It is an uncomplicated and indeed soothing spring/summer perfume with an unusual longevity: applied in the morning, it stayed noticeable on me until the end of the work day (in an AC’d office though). It is not a masterpiece the loss of which we should lament but it is very pleasant to wear, and I could think of other perfumes that should have rather been on a chopping block.

Have you come across any good linden perfumes recently?