Almost four years ago I wrote about the unusual inhabitant of the nearby pond: a domestic white duck.

Since then I kept watching him (for whatever reason I decided it was a drake) almost daily, feeling happy when I saw him in the company of other birds or sad when he was alone. Unlike other birds, this domestic duck seemed to be more “stationary”: most of the days he would be somewhere around the pond. Some days he wouldn’t be there, and I’d be worried that something had happened to him. But the next day he would be back, and the order of things would be restored.

One day, while walking in the neighborhood about a mile from our place, we came across another group of ducks with one white domestic duck. Was it our duck that got that far away from his regular spot? Could it be another white duck that also joined a wild life (after escaping from the same farm from the legend we came up with for the previous one)? We weren’t sure. I took a picture of that other group. As we came back that evening, our duck was back where it usually was, in the company of wild mallards, very similar to the one that we saw thirty minutes earlier. I took another picture and spent some time comparing the two birds. “Our” seemed bigger but then the distances from which I took those pictures were also different, so I couldn’t be really sure one way or the other.

In the following seven months we kept meeting a white duck here and there on our evening walks. We even found a “feeding spot” where two women from the apartment complex said they were feeding that white duck almost every evening. And we knew that there was a woman who fed all the birds next to our pond in the morning. And since after that one time it was back to seeing the white duck just once a day, I finally decided that probably it was the same one bird just migrating between several places that provided morning or evening meals.

A couple of weeks ago, driving by, we suddenly saw TWO white ducks in the same group of birds. I thought my eyes were playing a trick since there are other while birds around here – egrets or seagulls – whom from the distance I confuse with our duck from time to time. So we had to stop, I got out from the car, disappoint all the birds that rushed towards me expecting treats – but now I have a proof that at least two domestic white ducks live around here among wild birds. So, the title of this sequel post should have rather been: The Two Beautiful Duck(ling)s but that would have given the plot away. 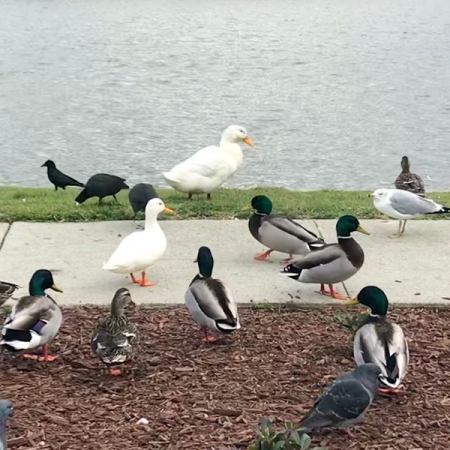 21 thoughts on “Small Things that Brighten Life: The Beautiful Duck(ling) 2”